For many of us, an external battery pack comes in near the top of our accessory priority list. Whether you travel for work or pleasure, topping up your gadgets on the go can be important, and that need can extend into durations or locations that require a few extra features or added durability. So, for all you outdoorsy types prepping for summer trips, we're taking a quick look at two new RAVpower batteries. One is "waterproof," both are solar-powered, and they clock in at 10,000mAh and 25,000mAh respectively.

Before you get too excited about harnessing the functionally infinite power of the sun for yourself, keep in mind that the small size of the solar panels equates to a pretty slow charging speed. You won't be topping either of these batteries up to full just laying them out in the sun for the day. At the fastest possible speeds, it might give you, say, an extra 800-1200mAh per day. They're more perk than point if you decide to pick one up. Even so, it's an extra free bit of power that could make a difference out on the trails, giving your electronic safety net the ability to replenish itself without an outlet.

The larger 25,000mAh battery offers a durable rubber-encased "waterproof" design with plenty of capacity, while the smaller 10,000mAh battery brings solar power to a pocketable form-factor. In my opinion, it's the bigger battery that's worthy of your attention, but either way, we've also got a pair of exclusive coupons (good until the end of July) that make them both a little cheaper. 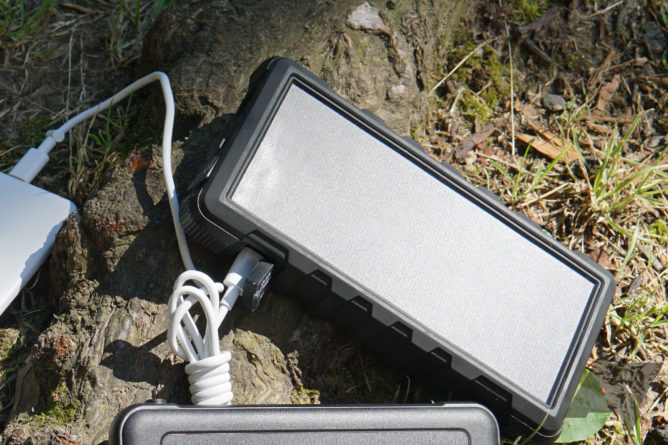 This is the larger of RAVPower's two new solar-charging batteries, and it's the one I'm most likely to recommend. It has all of the basics you expect, including USB-C and some level of undefined "Quick Charge" functionality over USB-A, presumably compatible with Qualcomm's QC tech. It's also advertised as "waterproof," and while I'd be hesitant to jump into a pool with it, the design does seem to offer some reasonable resistance.

At the list price of $52.99, it's a bit steep compared to the multitudes of similarly-sized batteries out there, but the extra solar panel and "waterproof" design justify a bit of a premium. Thankfully for our readers, RAVPower is offering an exclusive limited-time coupon (APRAVPB083), bringing the price down to $39.99.

So, how much does that get you?

It's a battery, so by need, it must be a brick. That means you get six chunky sides, with a solar panel on one of the larger faces, bordered on all the shorter edges by solid rubber. The back is plastic with a soft-touch rubber coating, a power indicator button, and four LEDs denoting charge. All the ports live in two groups along the rubber edge, covered by attached rubber plugs. Altogether, this rubber ringed, sealed design is meant to be "weatherproof," but there are some gaps in the material's coverage beneath the plugs covering the inputs/outputs. I wouldn't put too much faith in it actually being waterproof, but it should stand up to some splashing and most outdoor use (short of falling into a lake).

On the top edge is a metal ring for attaching or hanging the battery to something like a backpack or a tent pole. The opposite end houses a decently bright flashlight, controlled by long-pressing the power button on the back.

Included with the battery are 2 Micro-USB cables, one slightly sketchy looking Micro-USB to USB-C adapter, and a flimsy carabiner. 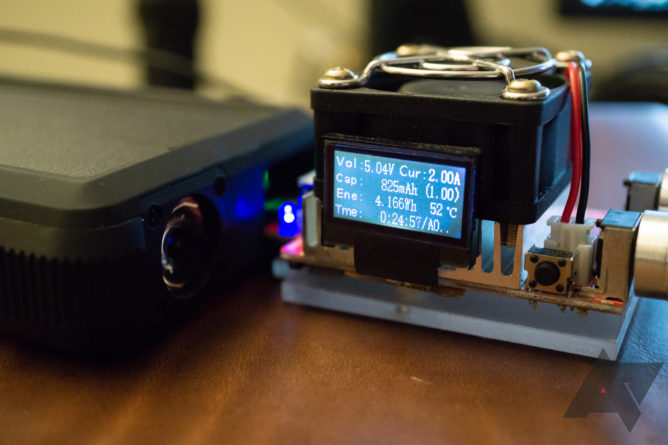 The pure specs from my tests are as follows: 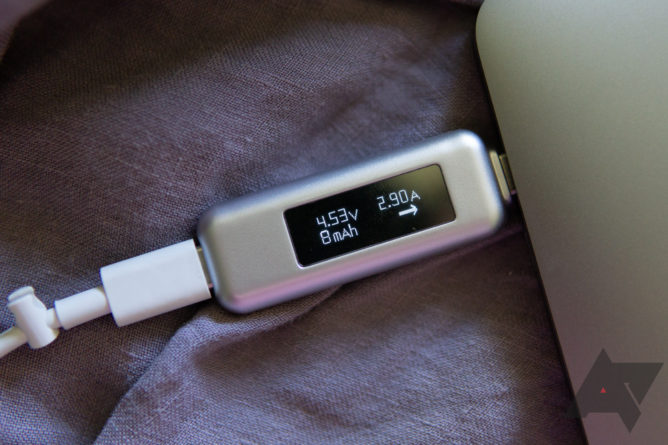 It's able to take a charge simultaneously from both USB-C and Micro-USB, and I don't have the gear to measure both simultaneously, so we'll have to accept the OEM's provided numbers for max rates. I will note, charging time over USB-C is quite long. After the full drain to test capacity, an overnight charge from a 2.4A source was not sufficient to top it up completely.

I can't measure charging rates or time realistically when it comes to the solar panel, but anecdotally it is very slow. If the specifications are to be believed, it provides power to the battery at a maximum of 5V/0.3A which is... not a lot. A couple weeks of direct sunlight might be required to fully charge it.

It's also worth noting that my Pixelbook—which is notoriously picky when it comes to power—refuses to pull power from it at all over USB-C. 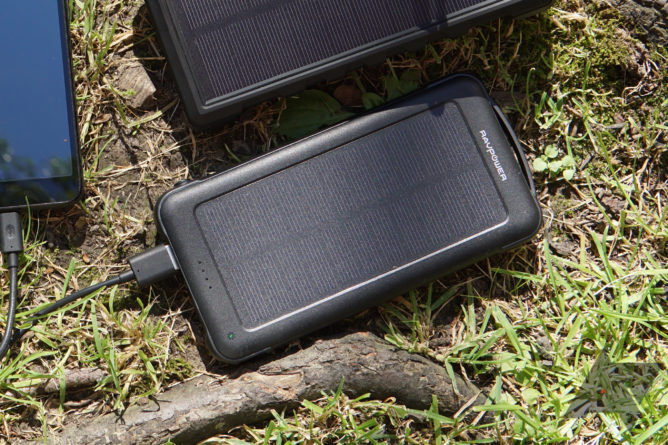 The smaller of RAVPower's new batteries is both less expensive and less durable. At a list price of $29.99, ($19.99 with our coupon code APRAVPB082) the 10,000mAh model still sports a solar panel, but there's no waterproofing here.

Half the price gets you less than half the capacity and fewer useful outputs, cutting down from 3 to 2 as it loses USB-C. There are only USB-A outputs and Micro-USB input.

This smaller battery is very different from its larger cousin when it comes to features and materials. It's still a brick, but it's thinner and less durable, encased entirely in matte black plastic. It also has a solar panel for charging, but this one is a bit smaller. All this battery's business is localized to the same side, with both outputs and a dimmer flashlight on the bottom edge. The power button is near that end on the left edge, while the Micro-USB input is in the same spot on the right. The LEDs for power level are at the bottom on the front. 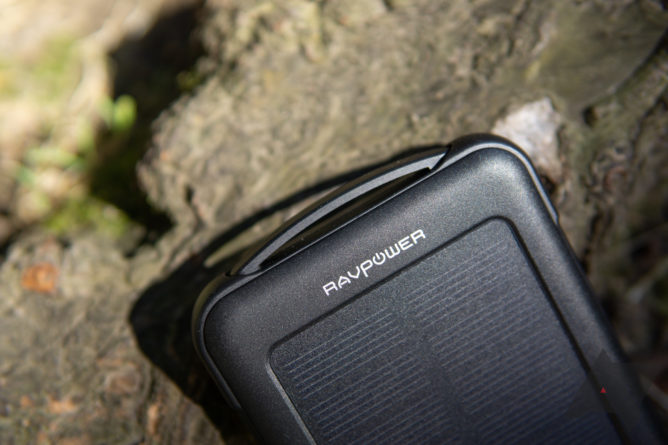 This smaller battery can also be hung up like its bigger brother, but this time by a flimsier plastic loop.

Included with the battery are two Micro-USB cables. 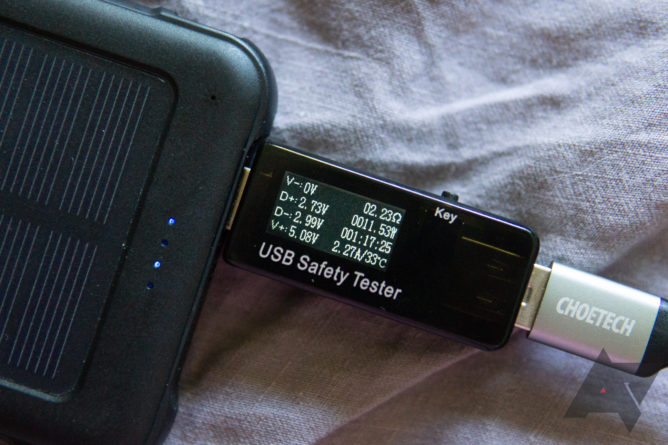 Pure specs from tests are as follows:

Although my tester was able to manually request up above 2.5A, none of my devices were able to exceed that rate. The largest real-world numbers I saw were 5V/2.3A with a MacBook Pro.

This smaller battery understandably fills up more quickly than the more capacious model, reaching a full charge easily overnight. Again, I can't actually measure the rates the solar panel provides the battery, but with an advertised 5V/0.2A maximum, it probably won't supply a full charge without a week (or more) of sunlight. 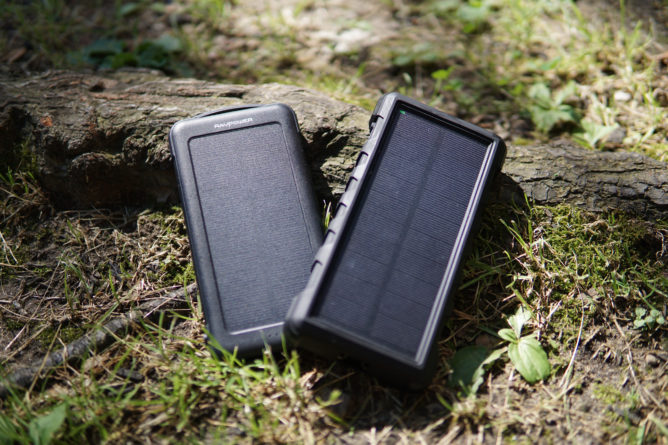 If you're the outdoorsy type who goes camping or hiking a lot, and you need something with some extra durability to keep a device topped up, the larger 25,000mAh battery should probably be on your shortlist. It's waterproof-ish, shock-mounted and durable, with a metal hanging hook and a range of outputs, plus a solar panel. It won't charge purely from sunlight very fast, but it might grab just a bit of extra power during the day as it's slung on your pack. The ~15W output limitation over USB-C could be a deal breaker if you hoped to use it with a laptop or more power-hungry device, though.

The 25,000mAh battery is waterproof, durable, and a decent value. The same can't be said for the smaller 10,000mAh model.

On the other hand, unless you need a solar panel and you're willing to skip USB-C support, I'd probably steer clear of RAVPower's smaller 10,000mAh battery. There are other slightly more expensive (though solar panel-less) models out there that support faster charging standards and USB-C. The difference really is worth it if your phone supports either.

RAVPower's batteries are sold exclusively through Amazon, and the company has offered our readers coupon codes for both models that are good until the end of July.