With the launch of the second developer preview of Android back in May, Google added a surprising and useful feature to the Overview interface. You could highlight and copy text and also make use of Android's smart text selection functionality. Optical character recognition (OCR) capabilities meant you could also pull text from images.

Even more interesting was that you could select and copy images in the same way, including those from apps that don't allow media to be shared (such as Instagram and Snapchat). Sadly, in DP4 this feature is no longer present.

It was great for copying text between apps and grabbing otherwise restricted photos, but for some reason, Google has decided to get rid of it with the third Android P beta. It may be that the ability to copy images from any app led to complaints from developers who prohibit it, leading Google to remove it altogether. Or it could be that the feature isn't quite ready for primetime — it certainly didn't always work consistently. If that's the case, we may well see it return in a more polished form with a future release. Only time will tell, but since this is now a near-final version of Android P, we probably won't see it anytime soon.

Still working for some users, and there seems to be a hidden setting

According to a number of you in the comments, this feature is still working for some in DP4. What's more, when I search "overview" in the settings app, there's an entry for Overview selection with the description "When switching apps, touch and hold text and image..." When I tap it, it goes to the Home settings menu, but unfortunately doesn't show any such setting. 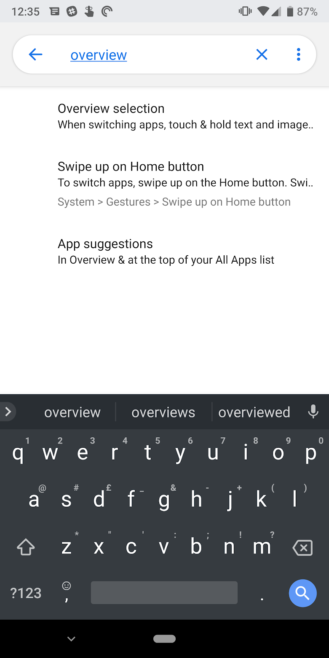 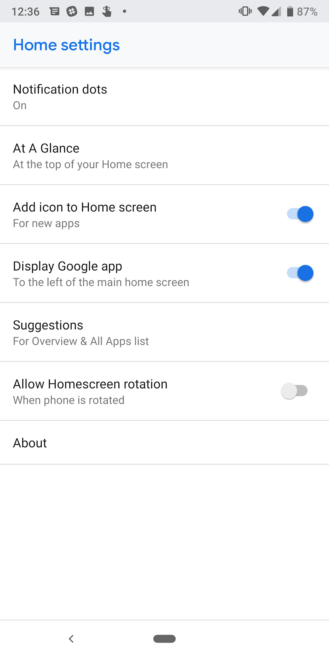 This one's a bit of a mystery, then, as others here at AP also can't get it to work. Potentially there is a setting for turning this on and off (as per the search in the settings app) which isn't actually showing up in the menu yet, and maybe it's switched on for some of us and off for others.

Most of the comments seem to suggest that it's still working, so if anyone also finds that this isn't working, please let us know.

Setting to turn it on is showing for some, but it's generally a buggy mess

The plot thickens... Thanks to all the commenters who've tried to help us get to the bottom of this. It seems that the setting to toggle this feature on and off is showing for some but not others. See below: 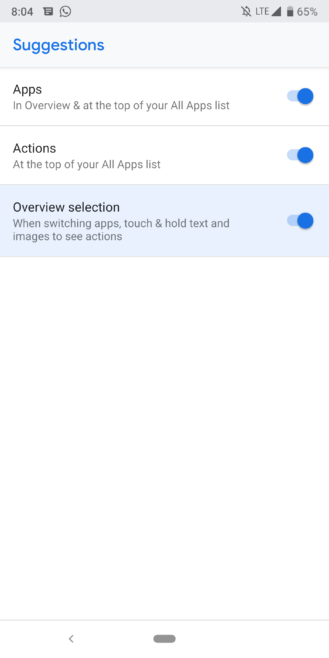 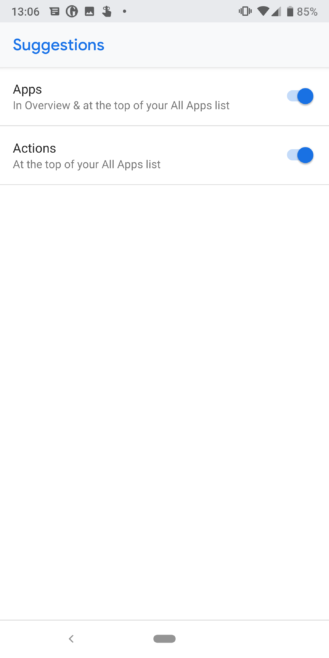 Regardless of whether you can see the setting or not, there are inconsistent reports from users about how this is functioning. For some, it's working just as before. Others can select text but get no action buttons for copying and sharing. Some get haptic feedback, but nothing else. Then there's my nothing is happening at all crew.

Hopefully, this will be sorted out in DP5 ahead of the final version of Android P. For now, the last thing I have to say is

This story is fast turning into a saga. We now have a few more details about text and image selection in Overview, as well as some bad news for owners of 2016 Pixels who might have hoped to make use of the feature. According to an Issue Tracker entry, Google accidentally enabled it for OG Pixels before turning off again — and that's how it's going to remain.

Around the time we first wrote about the feature in May, the issue tracker entry was made complaining that it wasn't possible on a 2016 Pixel, with others stating the same was true for the Pixel XL. The original poster then noted that it started working in DP4, only for the functionality to mysteriously disappear again moments later. The next day, a Googler marked the issue status as "Won't Fix (Intended Behavior)," confirming that the company is deliberately prohibiting first generation Pixels from getting the feature, despite there not appearing to be any hardware or software limitation behind the decision.

The Overview screen is now part of the Pixel Launcher, but Google can remotely control which version of it you’re going to see. Even if you’re using a different launcher, the Pixel Launcher provides the implementation. There must have been a mixup during the rollout of DP4 that saw the feature briefly enabled for unintended devices.

It worked fine on the OG Pixel for the brief time it was enabled, the poster said. Unfortunately, it's not uncommon for Google to limit new features to its latest products, presumably to drive sales, but in this case — as with others — it might be doing little more than aggravating owners of older hardware.

There are other Issue Tracker entries (here and here) relating to the previously mentioned problems with this feature on the 2017 Pixel 2 and 2 XL on which it is supposed to work — so it's all a bit of a mess right now. We can only hope it's all straightened out in the fifth and final developer preview, even if it won't be included for original Pixels. That said, it may be something Google decides to bring to the older models at some point down the line.