Android P is shaping up to be a pretty sizable milestone for the platform, but although the beta releases have been surprisingly stable, they aren't without bugs. They are "previews" after all, and in the latest image, there is one small regression worth noting: SafetyNet tests are failing. As a result, services like Google Pay which check for device security using SafetyNet are also broken, though not every phone on the latest previews is affected. According to a few recent reports, a server-side fix for the issue may be rolling out. 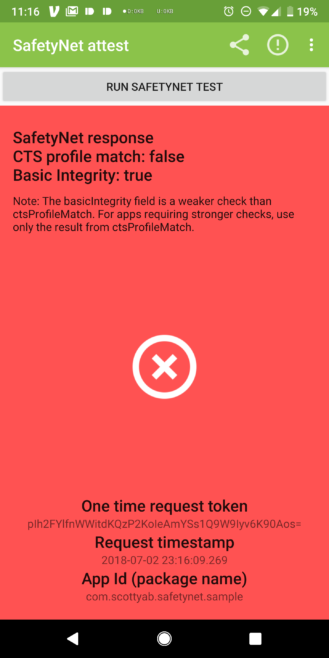 We've tested on our own devices running DP4, and can confirm that Google's Pixels are affected, but some third-party hardware running Android P betas/developer previews may not be. For example, my Essential Phone running yesterday's Android P release passes SafetyNet just fine.

PSA: Android P DP4 does not pass SafetyNet, even with 100% stock + locked bootloader.
I have experienced something similar in previous developer previews, it has to be fixed on Google's side. BTW, it is expected that CTS won't pass on previews, as stated in the preview page.

There's a ticket on Google's Issue Tracker for the problem, and at the time of writing it has accrued a bit over 100 stars in under 24 hours. As renowned SafetyNet-circumventing developer topjohnwu notes, the developer previews are explicitly not CTS approved, so while previous preview releases have passed SafetyNet, it isn't always to be expected.

Some recent reports have indicated that Google may be rolling out a fix for this on its end, and clearing Play Store and Play Services cache to trigger a new check will show the device as certified and passing SafetyNet. We're unable to confirm this on our own hardware.

Even so, this is the first release since DP1 to break SafetyNet so it may stand out for those that made the migration to Android P more recently. If you depend on Google Pay or other apps which use SafetyNet to check security, you might want to wisely wait for Android P to hit stable before updating. Even if a fix is forthcoming, Android P is in beta and this likely isn't the last bug we'll see.