At I/O, Google announced a set of new accessibility features for Android P, one of which was a new Accessibility Menu for motor-impaired users. It makes it easier to perform nine actions that would otherwise require precise gestures or hardware button presses. We looked for the menu in Android P DP2, which rolled out at I/O, but didn't find it then. Now, it's there, but it turns out it was likely implemented in DP3, but we didn't spot it until DP4 showed up yesterday.

To enable the new menu, head over to Settings -> Accessibility -> Accessibility Menu (under Interaction controls). After turning the toggle on, you'll see a new human shape in the bottom right of your navigation bar, whether you're using gesture navigation or not. That icon will stay there in the homescreen, in apps, and in any screen where the navigation bar is visible. 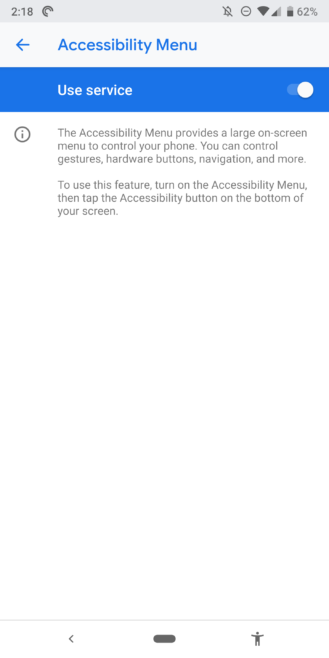 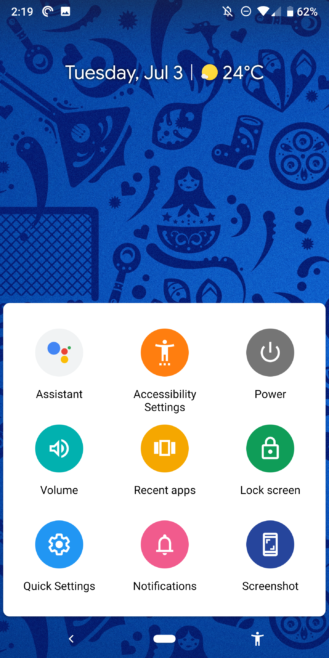 Tapping it reveals the accessibility menu, which was properly designed with large icons and a bottom placement. Nine options are listed, including actions that normally require gestures (Quick Settings, Notifications) and ones that usually need a few hardware presses (Power, Screenshot).

Every little bit helps when you have a physical disability, and this menu does seem like a good step forward. Even without any motor impairment, I could see myself enabling it because it makes a few actions easier to access than reaching up and swiping, or pressing multiple buttons.