Scaled down versions of apps are nothing new; Google has made plenty of "Go" apps specifically for emerging markets where internet connections are unreliable, phones are generally less capable, and plans offer less data. Uber is now getting in on the act, too.

Uber Lite has been built with India in mind — where it's currently being piloted — but it will be coming to other regions around the world later on. It's been designed to save space, weighing in at only 5MB (or about three selfies as Uber helpfully points out), and run on any Android phone. Even when on a network with poor connectivity, a response time of just 300ms is touted, so you should be able to book a ride almost immediately.

Most of the same features are still there, including sharing trips with others, but there are also some new ones specific to the Lite app. If it can't accurately pinpoint your location (due to GPS or network issues) it will offer you nearby pickup points that might work for you. Top destinations are cached so still set up a trip even when you're offline or the connection is spotty. The map view that we all know from Uber will not display by default, to keep the app running smoothly, but you can still tap the option to bring it up at any time.

Uber Lite is currently being trialed in India, which is likely to be its most popular market, and more features such as language selection and offline requesting are coming soon. When it's ready for primetime, Uber will also launch it in other countries — in the meantime, you can sign up to be one of the first to learn more.

We've now got the Uber Lite APK over at APK Mirror. We also have its Play Store link, though it's not live to the public yet. If you're in the US, don't bother downloading it; all you'll see is the screenshot below (with some rather poor English). 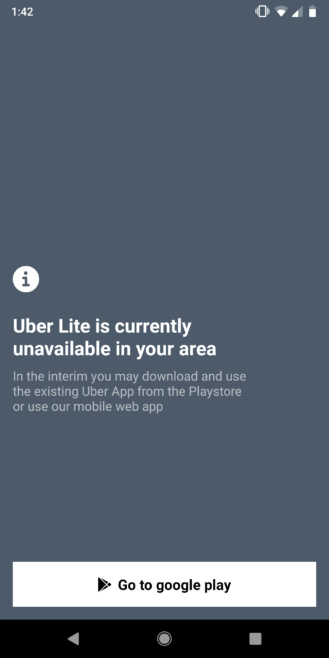