Last August, Google announced an enhancement to its Play Store search and discovery algorithms, all in the pursuit of a better consumer experience. This was a natural next step after the company said it began tuning its algorithms "to optimize for user engagement, not just downloads" at its Developer Day at the Game Developers Conference in February 2017. In part, these moves appeared to be shots across the bow aimed at getting developers in line. But in recent weeks, it seems we've approached a sort of endgame, and some smaller developers are losing — big time.

Some Android developers have recently observed a precipitous drop in installs for their games and apps. Some devs reported losing up to 90% of their typical app install rates in the Play Store. Google has since confirmed that it ratcheted up changes to its Play Store algorithms, though the exact reasons for the drop in installs for some devs remain mostly opaque. There are a few moving parts in this saga, but one of the more visible signs of something awry is the "Similar Apps" section.

A quick look at the flight simulator apps involved in AxPetre's email today seems to show that these issues are partly resolved (at least for me here in the US on mobile and desktop). However, it's not too difficult to find an app, more likely a game, that still has a head-scratching "Similar Apps" section. The game Rio Rex, for instance, includes Grammarly and a number of keyboard-related apps in its "Similar Apps" section. 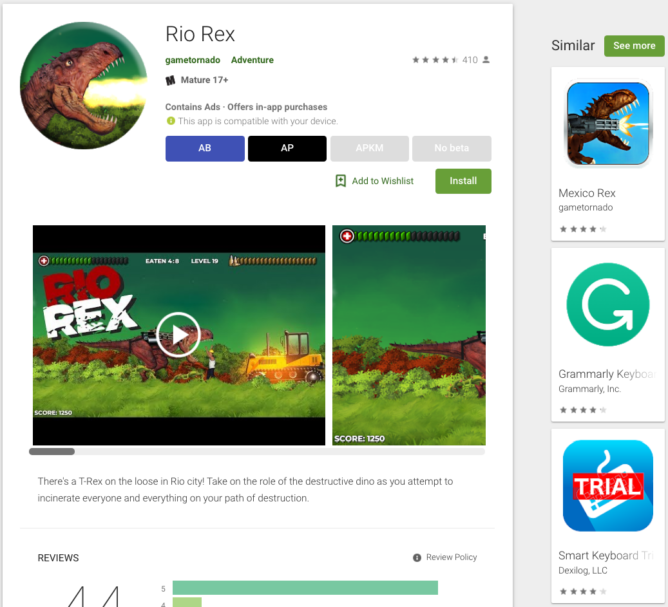 The first "Similar" app makes sense; the other two, not so much.

Other recently observed Play Store bugs include blank app category pages in some regions and the inability to display a developer's full list of apps (if a dev has about 15 or more apps to their name). It's impossible to say how much each of these issues is hurting app installs for affected developers, but they clearly don't help. This is particularly unsettling for smaller devs who depend on their apps to earn part or all of their living.

Yesterday, Google published a post on its Android Developers Blog, which basically repurposed responses that some devs were receiving from support reps via email this past week. In the post, Google reiterates that it has been enhancing its search and discovery algorithms to take app quality and user engagement more into account. "This means that apps and games that have high retention rates, low crash rates, low uninstalls, and many other factors, are recommended more often."

Google also shares that it recently "increased the importance of engagement and app quality in our recommendation systems and users reacted favorably to the changes." There is no direct acknowledgement of developers' complaints, though the post ends by pointing them to last August's post and its "Design & Quality" documentation.

If you're a developer affected by Google's recent changes to its search and discovery algorithms in the Play Store, let us know in the comments below. You should also review the resources Google links to in its blog post, track the Unity Forum thread, and consider joining the related Discord developers group, which is approaching 1,200 members.

[Update: APK download] Uber is piloting a Lite version of its rider app in India