Smartphone cases, in all their various forms, are meant to do one thing: guard our increasingly expensive pocket-sized supercomputers in case we lose our grip as we absentmindedly jab at them with one finger while also walking and drinking coffee. There are many that do a pretty good job of this, but a German engineering student was evidently dissatisfied with the level of protection afforded by what's currently on the market. So, naturally, he created ADcase, a silly and wonderful contraption that detects when your phone is falling and ejects springy spider legs to dampen its impact.

Philip Frenzel of Aalen University, a small school about two hours northwest of Munich, designed the ADcase, which has its own battery and sensors to detect when the phone it's on is headed earthward at an unsafe speed. The AD in ADcase stands for "active damping." After the case's spring-loaded legs have been deployed, you have to straighten them out and fold them back into the back of the case by hand.

The ADcase isn't currently available for purchase, but according to the case's website, it's headed to Kickstarter in the near future — and judging by how novel and plain cool it is, I reckon it won't have any trouble meeting its funding goal. 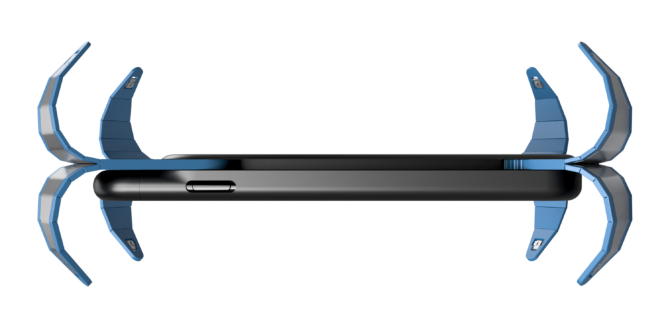 Unfortunately, it seems there are currently no plans to support any Android phones — the project's site only lists iPhone models, from the iPhone X all the way back to the 6 and 6 Plus. But hey, maybe we'll see some devices we care about as stretch goals in the Kickstarter campaign. We've reached out to Frenzel for more info on potential Android variants.