If you use Instagram, there's a good chance you've tried out Stories, which lets you send timely updates to your followers in photo or video form. It's probably to blame for the waning interest in Snapchat and has had a steady stream of feature updates such as sharing from other apps. So it's not at all surprising to learn that Instagram Stories now has 400 million daily users.

With its latest new feature, which we discovered in a recent teardown, you'll be able to include a soundtrack in your Stories. It's live right away on iOS with version 51, and will soon be coming to Android. 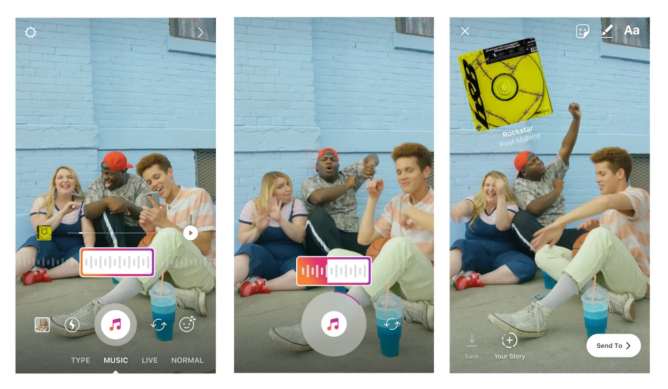 A music icon will show up with the rest of the stickers, and tapping it will bring up a list of popular songs. You can also filter by mood and genre, or search for a specific song. A play icon next to each track allows you to preview each one, and a song can even be selected before recording a video, by swiping to the music option. You can skip through tracks to choose an exact part, too, before taking a video with it in the background.

Song titles, artists, and album art will appear on any story that has music added to it. There's no mention of how many tracks there are to choose from, or how they're sourced, but more will be added on a daily basis, so there should be plenty to choose from. It's unclear when this feature will go live in the Android app, but it shouldn't be too long.

Now live on Android for some

According to a couple of commenters below, this is now live in the Android app (version 51.0.0.20.85), at least in part. I've tried it, and while I'm able to add the music sticker to a photo or video I've already taken, I'm not able to choose a track before taking a video. Presumably, that will come later.

Alcatel 1X review: Android Go is a huge compromise in every sense, including price

Isoland 2: Ashes of Time is a new point and click adventure game worth the $2 entry fee