Spotify is (probably) the most well-known music streaming service, but it isn't without its foibles. Up until earlier this year, it was a common complaint that free users couldn't actually directly select songs to play, and the A/B UI tests are almost Google-level frustrating. By far my biggest personal issue has been the inability to reshuffle tracks in a playlist from the Android app—a very basic feature that even Play Music has. Thankfully, that particular annoyance is now set to be fixed in a future update.

The news comes courtesy of a status update on a "Live Idea" post to Spotify's community. Details are understandably sparse, but the update states that Spotify's engineers are working on adding the feature as we speak. When it eventually lands, it will also only be initially released to a small number of users—probably either via the slightly-secret Spotify Beta or in A/B testing. 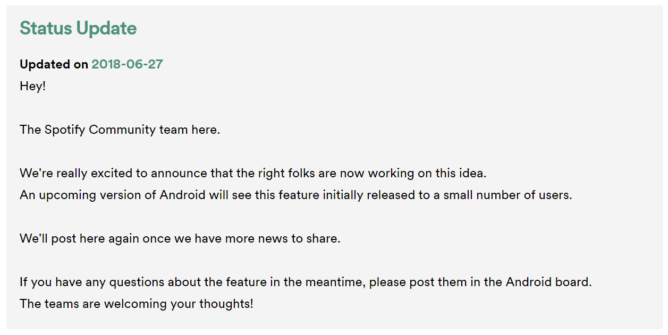 While you've been able to rearrange tracks in playlists via both the web player and desktop client, adding the feature to the Android app should make managing your tunes on the go a whole lot easier. Personally, this is the biggest news I've heard all week. There's no timeline yet, but better late than never.