The varying bus types, speed classes, and specification standards for SD cards can be confusing for the layman to navigate, but performance for the diminutive storage devices has been making a lot of progress over recent years. You can even buy one with over 500GB of capacity in a package smaller than a postage stamp, and now the SD Association is setting its sights on even bigger and faster cards with the new SD Express and SD Ultra Capacity standards as part of the SD 7.0 spec.

SD Express will give cards, regardless of size, the "EX" logo you see above.

SD Express integrates the near-ubiquitous PCI Express 3.0 and NVMe v1.3 standards into the SD card interface, providing the convenience and incredible performance of a PCIe bus in an SD form-factor. That means future cards could have up to a whopping 985 MB/s transfer rate. That's almost fast enough to record an 8-bit 4K uncompressed raw stream at 24FPS, and enough for 24FPS uncompressed 10-bit 1080p content. 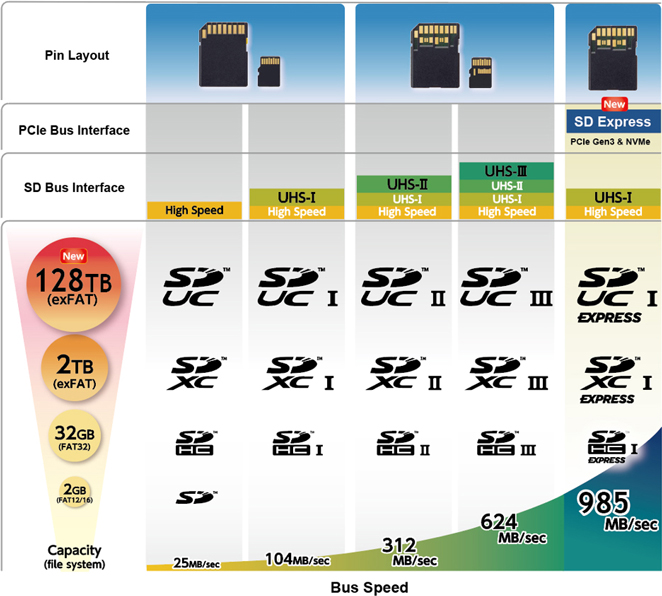 NVMe also opens the door for significantly improved access times, meaning in the future, SD might be genuinely usable for things other than storage on Android devices. However, it also looks like these new standards require the extra pins on the 2nd row present in the UHS-II interface so we won't be seeing this land on the stereotypical 9-pin connector SD card types. 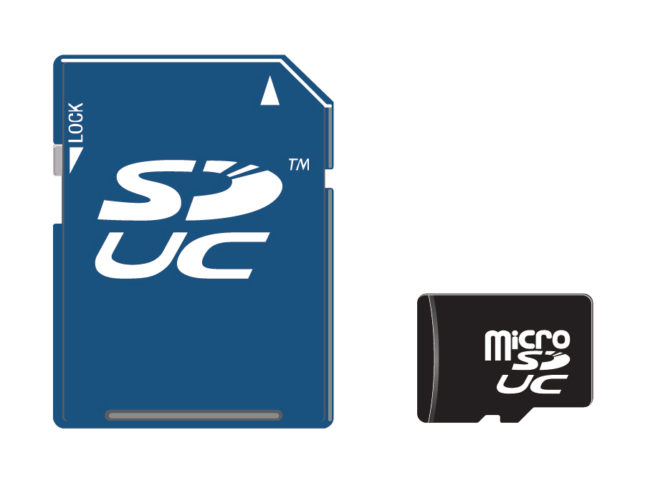 SD Ultra Capacity, or SDUC, is all about expanding storage size. Just as the earlier SDHC and SDXC standards gave cards a bump in maximum supported capacity, SDUC increases things to a maximum of 128TB up from 2TB in SDXC.

Pulling from the PCIe and NVMe standards for this new effort is probably the smartest thing the SD Association has ever done, as each is well supported and well understood by hardware manufacturers, and adoption will likely be faster than a new SD-only standard would have been.

Although it's unlikely the controller on SD cards can catch up to SSD-level performance any time soon, this opens the door for the possibility. At a minimum, the bus for the SD interface won't be a bottleneck.

You can peruse the full whitepaper PDF for the SD Express standard here, but it's a non-trivial read. Odds are we won't see any new products making use of these two new specs for some time, but the groundwork has been laid. I wouldn't be surprised to see OEMs skip preexisting UHS-II and UHS-III associated intermediary standards in a move directly to SD Express and SDUC.

To answer the probable, immediate, and burning question: No, your phone probably won't see these any time soon. As yet, no phone fully supports UHS-II, and that's a prerequisite for the SD Express benefits.

SD Express – a Revolutionary Innovation for SD Memory Cards
SD Express integrates PCIe® and NVMe™ for up to 985 MB/sec transfer rate, while keeping compatibility with existing billions SD hosts in the market

“SD Express’ use of popular PCIe and NVMe interfaces to deliver faster transfer speeds is a savvy choice since both protocols are widely used in the industry today and creates a compelling choice for devices of all types,” said Mats Larsson, Senior Market Analyst at Futuresource. “The SD Association has a robust ecosystem with a strong history of integrating SD innovations and has earned the trust of consumers around the world.”

“PCI-SIG is pleased to have teamed with the SDA to collaborate on this innovation for the world’s leading removable memory card – SD,” said Al Yanes, PCI-SIG president and chairman. “PCIe specification conformance tests are available today by major test vendors, offering a significant advantage for any new PCIe adopter.”

“NVMe is the industry-recognized performance SSD interface from the client to the datacenter, shipping in millions of units,” said Amber Huffman, NVM Express™ Inc. president. “Consumers will benefit by SD Association adopting the NVMe specification for their new SD Express cards.”

A new white paper, “SD Express Cards with PCIe and NVMe Interfaces,” provides more details on the new capabilities and features found in the SD 7.0 specification. More information is available on our website.

PCI-SIG is the consortium that owns and manages PCI specifications as open industry standards. The organization defines industry standard I/O (input/output) specifications consistent with the needs of its members. Currently, PCI-SIG is comprised of nearly 800 industry-leading member companies. To learn more about PCI-SIG, and for a list of the Board of Directors, visit www.pcisig.com. PCI Express® is a registered trademark of PCI-SIG.