It’s great that you can enjoy YouTube Music almost anywhere. It’s also important that you’re not restricted to certain devices when you’re coughing up $10 a month. But Google doesn’t offer a native desktop app, and using YouTube Music (or Play Music) in a web browser can be a pain. Who likes hunting for the right tab just to pause or skip tracks?

Fortunately, there is a third-party solution that works wonderfully. Attard’s desktop client mirrors the web experience perfectly, and gives you greater control over playback. It also adds some features that you don’t get on the web.

You can control the app using the media keys on your keyboard, the taskbar media controls on your Windows PC, or if you’re feeling really lazy, with voice commands. Desktop notifications let you know what’s playing every time a new track begins, and you can specify which audio output device is used from within the media player itself. There’s also a simplistic mini player for those who want an uncluttered desktop, and a customizable dark theme that’s easier on the eyes at night.

The app is built with HTML5 so you don’t have to worry about Flash Player eating up system resources, and it’s compatible with just about every desktop platform, including Windows 7 or later, Mac OS X 10.9.0 or later, and Ubuntu 14.04 or later.

If you like the native app experience, you’ll be pleased to know there’s now an unofficial Android Messages app, too. Built by Chris Knepper, the app puts the web-based Messages experience, with all the same features, right on your desktop. It’s compatible with Windows and macOS, and again, negates the need to hunt down browser tabs when you want to chat. 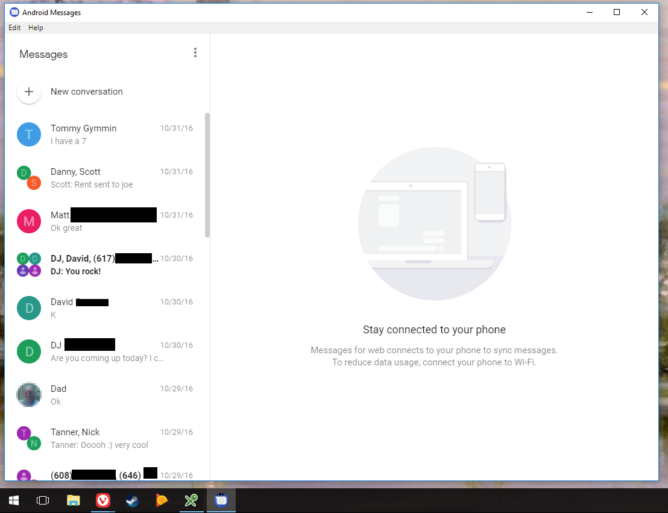 Knepper warns he hasn’t had chance to carry out a great deal of testing yet, so you might run into a few teething troubles. He is continuing to work on it, however, so updates that improve stability will come.