The three cameras on the rear - a configuration we've only seen yet on Huawei's P20 Pro - include a standard wide lens, LG's signature ultrawide lens, and a third sensor for an as-yet undetermined purpose. This could be a zoom lens, or it could be dedicated to bokeh or depth of field effects - we're really not sure. Either way, add them all up and you've got a phone with five camera sensors. This would be the first major smartphone I'm aware of packing that many shooters.

According to our source, the phone will feature a notched display (like the G7, you can turn the notch "off") and a design that essentially resembles a scaled-up G7. The G7 isn't a bad-looking phone by any means, so it stands to reason that the V40 will look and feel the part of a super-premium smartphone. Qualcomm's Snapdragon 845 processor will power the whole show, all but a given for a device launching later this year. LG's Quad DAC is still in tow, and there's a dedicated Google Assistant button along the volume rocker. The fingerprint sensor will remain on the back. 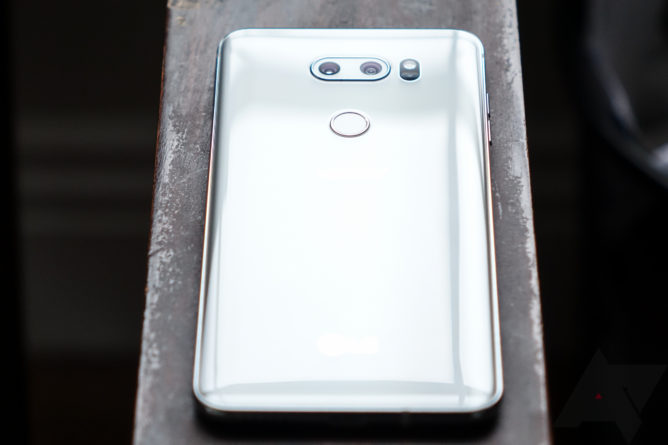 The V30, pictured, did a lot of things right - but a poor display and lackluster cameras kept it shy of greatness.

Which is all to say: if you were expecting a major reinvention over the G7, this isn't it. LG's sticking with that basic formula on the V40, though obviously it's giving it a serious camera upgrade - hopefully better images come along with it. As for the display technology, we don't know if LG has gone with an OLED panel or an LCD. The G7 used the latter, and while it was a good, bright screen, battery life on that phone really wasn't outstanding. And while five cameras sound nice, LG's lost some of its competitive edge in smartphone photography in the last year as the likes of Samsung, Google, and Huawei continue to up the standard for mobile imaging excellence.

LG has an uphill battle ahead of it with the V40 (frankly, the V35's existence seems all the more confusing now), and while what we've learned makes it sound like the component pieces for a good phone are in place, we know it's all in the execution. Hopefully we'll be hearing more about it soon enough.

[Update: APK] Firefox Focus is moving from WebView to the Gecko engine starting with the latest ...