When the Pixel 2 XL came out, there was a great deal of consternation about the LG-made OLED panel. I was firmly in the "it's fine" camp, but my opinion has changed over time. No, I didn't suddenly decide the blue shift was a deal breaker. The oleophobic coating on the glass is just so bad that my phone is constantly a smeared, gross mess. It's so annoying that I almost don't want to use this phone, which I otherwise adore.

Oleophobic coatings aren't something we talk a lot about, but almost every phone you've touched in the last decade has one. At the dawn of the modern smartphone era, there was resistance to the idea of using capacitive touchscreens instead of resistive ones. A resistive screen works with a stylus, so you didn't get fingerprints all over them. And indeed, touchscreen phones picked up a lot of oily fingerprints for the first few years. The iPhone 3GS was the first to have an oleophobic coating to repel skin oils, and that made a huge difference.

The oleophobic coating on your screen doesn't prevent it from collecting fingerprints, but it makes them easy to wipe off—just give the screen a quick wipe with a cloth (or let's face it, your pants), and the screen is clean. Oil sticks to glass without an oleophobic coating, so you just smear your greasy fingerprints around when you try to clean it off.

We've known since the iPhone 3GS that oleophobic coatings are not forever. They can and will wear off over time. That brings me to Google and the Pixel phones. I and many others noticed that the first generation Pixels started to lose their oleophobic coating as they got on toward a year old. That was perhaps a little faster than most devices, but it wasn't egregious. However, the Pixel 2 XL's coating has proven to be less robust.

There are a number of Pixel 2 XLs in use by AP staff, and the oleophobic coating has worn off of most of them. I haven't even carried my Pixel full time as I often need to switch to another device for reviews. Yet, I began noticing fingerprints smearing instead of wiping away cleanly after just a few months of intermittent use. Now, it's gotten so bad that I can't even touch the phone without being reminded that I'm a greasy animal. The smudges look unpleasant when the phone is asleep, and there are visible rainbow patterns on when the phone is in use from light interference. If I'm outside, it can be genuinely hard to make out what's happening on the screen because of the smudges.

I reached out to Google about the issue, and this was the predictably obtuse response.

"We use a high quality oleophobic coating comparable with other premium smartphones, and we put all of our products through extensive reliability testing during development and in the manufacturing process. The Pixel 2 coating performs according to industry standards, which means that it is susceptible to wear over time, with variation based on usage."

So, Google says the Pixel 2 XL display has a similar oleophobic coating to other phones. That has not been my experience, nor the experience of most AP staff. We're not alone—there are users across the internet complaining about the same thing. 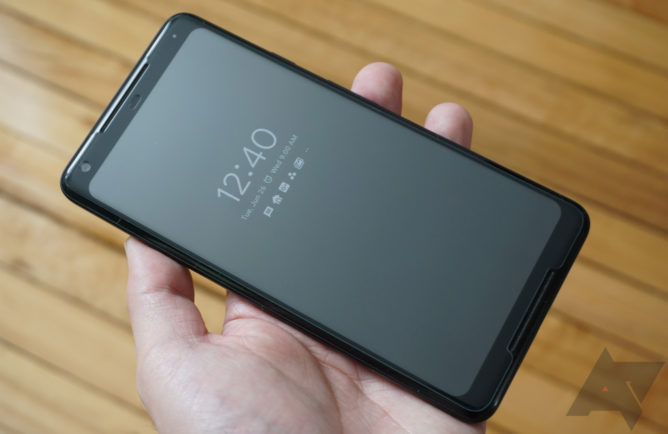 The Pixel 2 XL with a screen protector.

I was profoundly annoyed with my phone looking like an oil slick, so I did something I never do: I bought a screen protector. I don't like how these look or feel on a phone, but they look much better than the bare screen without an oleophobic coating. Screen protectors come with their own coating, so I can once again use the Pixel 2 XL without excessive oil build-up. This is an imperfect solution, though. I don't expect the screen protector's coating will last as long as most phone screens, but I can at least replace it.

I'm not saying you personally should hate this phone—I don't even hate it. I want to love it for all the ways it's amazing. Maybe something like this won't even bother you, or you use screen protectors by default. That's fine, but I really hope Google improves the oleophobic coating on the upcoming Pixel 3.