An update to the Duo app is making its way out, but this appears to be a small-ish service update, at least for now. There's no specific sign that this version will re-launch the screen sharing feature after it rolled out in a malfunctioning state with v34, but it's possible that the implementation has been fixed and the feature will be turned on later. Instead, this update marks the end of Jelly Bean support. A teardown also shows that official tablet support is almost here.

We've been seeing it a lot over the last few months, Google apps are shaving off the low end of their support list and bumping to something a bit newer. Duo is the latest to join the trend as it leaves behind Android Jelly Bean (4.1 - 4.3) and sets KitKat (4.4) as the oldest officially supported version.

It's important to note, this doesn't mean the Duo app will stop working on Jelly Bean, only that it will no longer receive updates to the app. Users on Android 4.3 and earlier will simply stop receiving new versions of the APK, but v34.5 will probably still be available from the Play Store and the Duo service will still work. However, it stands to reason that the app will eventually adopt new protocols and codecs for audio and video that are no longer compatible, and that will ultimately put an end to Duo usage on Jelly Bean.

As of May 2018 (Google hasn't published numbers for June), all three versions of Jelly Bean combine to account for 4.3% of the Android ecosystem. With KitKat as the new base version, Duo still officially supports 95% of devices.

Preparations for tablets and smart displays

We've known for a long time that Duo would be multi-device compatible. In fact, ever since the Google account support was added and a few bugs were worked out, we've been able to log into a phone and tablet at the same time with the same account and use them seamlessly. However, you had to sideload the Duo apk since the Play Store still doesn't allow a direct install onto tablets. 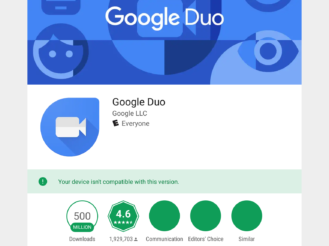 The latest version comes with some new and updated text that suggests the team is almost ready to unveil tablet support. The big addition is promo text that makes no bones about pointing out that users can make and receive calls on tablets.

There is also a slightly updated message on the Google sign-in dialog used to explain that you could use your account to be more accessible on Duo. The latest version adds a few words to say that you can sign into "other devices" with the same account. It's a small difference, but it does mark a change in language where Duo is more clearly described as a multi-device app. 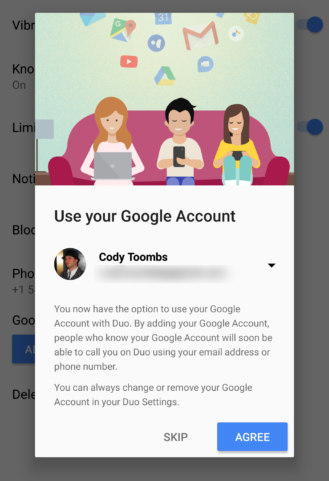 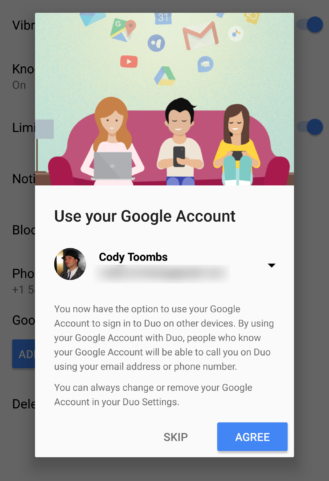 This is interesting news for tablet owners, even if it's just a portent that they won't have to mess around with sideloading Duo in the near future. Of course, this change is likely motivated by the upcoming launch of smart displays, which are probably still about three months out with the launch of Lenovo's first model scheduled to ship out in September.

If you happen to live in an area where Tez is in use, Duo will also be setting up a promotion to give a special offer to you for getting new people to join.