Since their release, Spectacles, Snapchat's funky, video recording sunglasses, could only export circular video. Presumably, this was to differentiate video recorded on Spectacles from other sources, to raise awareness of the product. While unique, circular video isn't particularly practical. Snap seems aware of this, as a recent update has enabled Spectacle to export video in more traditional aspect ratios.

Spectacles can now export circular video with either a white or black background, in addition to square and "widescreen" (which appears to be 4:3) video. While the more common shapes aren't as striking when viewed on Snapchat, they are better for, you know, watching. 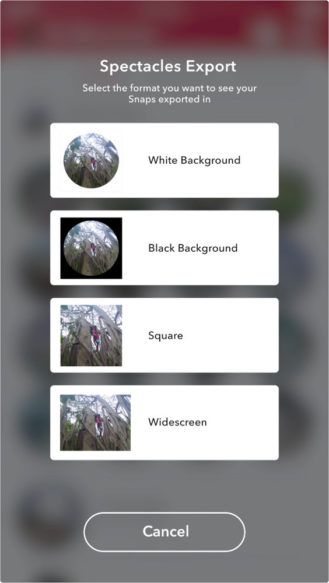 An updated version of Spectacles released earlier this year, with a new look and features, and a higher price tag. Snap also began selling the glasses on Amazon earlier this month.