Chromebooks now spread across a wide range of price points. You have the ultra-premium Pixelbook, complete with a really high cost, and mid-range options like the Samsung Chromebook Pro. Then you have the budget models — it's still surprising to me that you can pick up a functional laptop that does most everything that a normal person needs for a few hundred bucks.

Acer is one of the dominant players in the lower-end space, typically offering solid machines for very attractive prices. And while the company has significantly improved its products and found more efficient cost-cutting measures, Acer's budget Chromebooks still suffer from performance or build quality concerns. Taking a large step down in size from the last model I reviewed, the Chromebook 15 (2017), I have the Spin 11, a 2-in-1 laptop with stylus and Play Store support.

At a $349 MSRP, the Spin 11 offers plenty of battery life and a decent touchscreen. But poor performance, a very meh trackpad, an underwhelming display, and a spongy and uncomfortable keyboard sour the experience. In the end, $349 is a lot to spend on this machine, too much for what you get here. 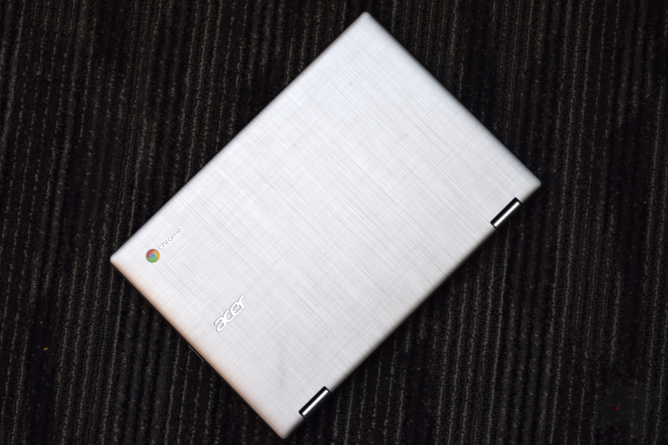 The Chromebook Spin 11 is sturdy, with a thick body and solid heft; it's by no means a svelte machine. Actually, it's roughly the same size as the XPS 13 (9370), though the latter is much thinner. Still, this is a $350 Chromebook and the all-plastic construction will help it endure the rigors of family and student life. Its size makes it quite portable for tossing in a backpack to head off somewhere, too.

For connectivity, Acer provided two USB-C and two USB-A 3.0 ports, one on each side of the laptop. You also get a Kensington lock and a microSD slot. For $350, that's more ports than I'd expect, and anyone considering the Spin 11 will be happy to see that you can charge the laptop from either side — I have really come to love being able to do this. And for wireless, the Spin 11 sports 802.11ac Wi-Fi and Bluetooth 4.2. 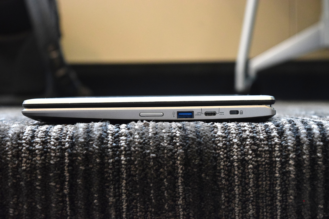 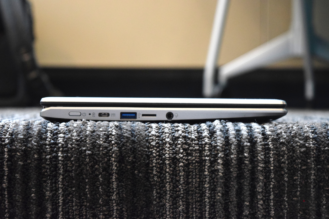 More ports than you'll find on some $1000+ laptops

As the name implies, the Spin 11 is a 2-in-1. Hinges are sometimes a concern with convertible laptops, sometimes feeling flimsy or weak. Good news, this Chromebook's are firm enough to hold the lid in place, regardless of the position. Sadly, it does not pass the one-hand open test.

The webcam is pretty bad, as is typical with laptops. The photos it takes are grainy and underexposed with soft details. Video calling is also pretty subpar, but I expected all of this.

Acer didn't set out to win any design awards with the Spin 11, which is fine. Despite being all plastic, the lid has a crosshatch design that has an almost fabric-like texture. It certainly adds a bit of allure, making the Spin 11 look a tad bit nicer at a distance than it actually does. 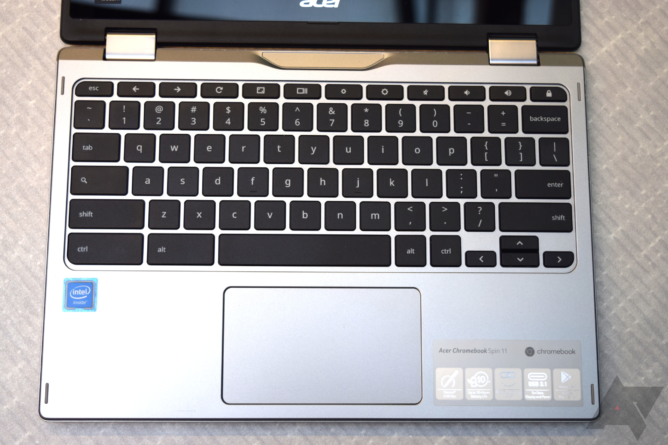 With any budget laptop, you can expect lackluster keyboards and trackpads and the Chromebook Spin 11 is no different. The island keyboard is well laid-out and comfortable for short-term bouts of typing. The keys have more travel than I anticipated, but they bottom out too softly, which gives them this squishy, spongy feel. It's often distracting and uncomfortable for longer periods of typing.

The trackpad is plastic yet large, and it supports Chrome OS' multi-finger gestures. It's not bad, per se, offering reasonably good control and precision, but I have the same problem with it that I do with certain other plastic trackpads: my fingers tend to "stick." While it's unreasonable to expect a glass one in this case, the Spin 11's trackpad lacks any kind of glide. It's a minor annoyance, but it's more noticeable while attempting to use gestures.

The 11.6" IPS LCD panel is nothing to write home about. Coming in at 1366x768, text, images, and other media are certainly soft and dull; the Spin 11's display is quite mediocre, especially in its color accuracy. The gargantuan bezels certainly don't help, often becoming distracting while watching videos or attempting to write some longer-form piece of content — not to mention making the display itself seem smaller. 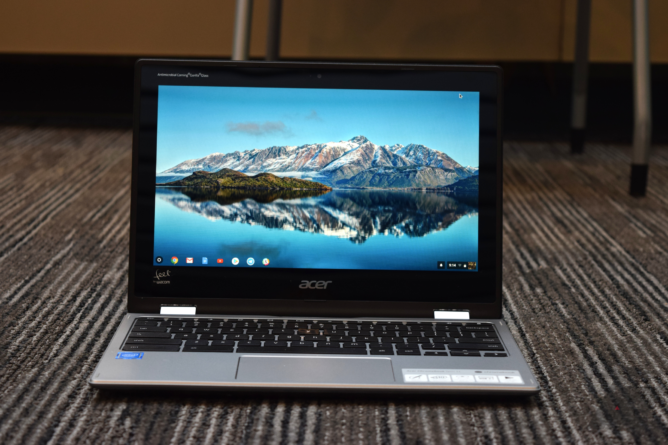 The touchscreen is actually quite responsive with very little latency. This means that it will work well for Android apps, which are installable on the stable channel right out of the box. Acer also includes a Wacom EMR stylus for sketching, note-taking, and whatever else you might want a stylus for. It's a solid pen, but there's nowhere to store it within the laptop itself, unlike the Chromebook Plus. Performance overall was good, though some apps, especially OneNote, can be a bit sluggish when using the stylus.

With the Celeron N3350, a low-end dual-core CPU clocked at 1.1GHz (boost 2.4GHz), the Spin 11 is best suited to a handful of tabs or an Android app or two open. Exceed eight to ten tabs and the whole thing slows down; similarly, running more than two or three Android apps at once causes sluggishness. Combine several things open and the laptop hangs on basic things like text entry, closing tabs, and loading pages. 4GB of RAM isn't lavish, but it should be plenty for Chrome OS. 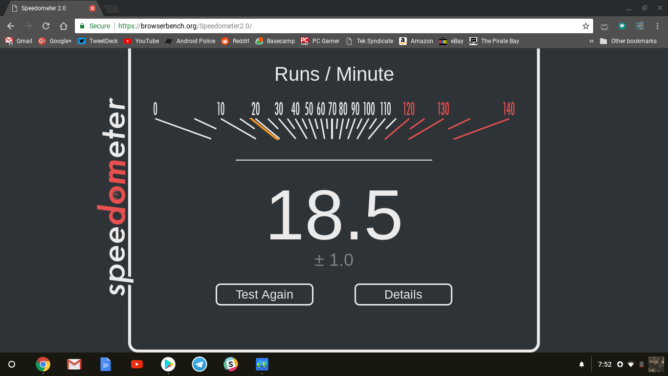 Heavier webpages like YouTube, Docs, and Slack are best left on their own without other tabs or apps open. I tried my normal workflow on the Spin 11 and it was an exercise in extreme frustration. Keeping Slack (because the app is god-awful on Chrome OS), Basecamp (our task management system), my article tab, and the source/research pages open all at once was nightmarish.

32GB of eMMC storage is what you get. And while it's not the fastest out there, it does just fine for Chrome OS. If you want more local space, you can always expand with a microSD card. 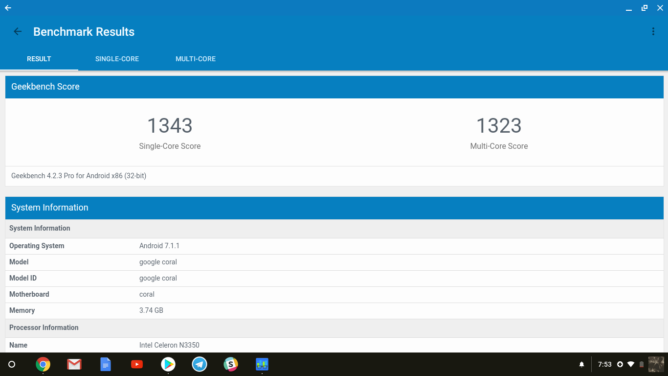 Acer claims that you'll get about ten hours out of the 37Wh battery, which is fairly accurate with light usage. Other than my attempt at my usual workflow, I kept the Spin 11 limited to a tab or two at a time, with the occasional app open. This gave me between nine and ten hours, which is pretty good. Standby time, however, is inconsistent — sometimes, it could go several days with nary a single percentage point lost, other times, I'd close it with roughly 80% battery and come back the next day to it dead.

Acer's latest attempt at a budget Chromebook isn't a good one. For $350, the Spin 11 doesn't perform well and the shortcuts are readily apparent all over the laptop. Compared to what you get with the Samsung Chromebook Plus – also a 2-in-1, by the way – for $100 more (MSRP, it often drops to ~$420), I think that Acer has a flop here. Samsung packed in better performance, a better display, and a marginally better keyboard for slightly more. The value proposition here, meanwhile, is just not good. 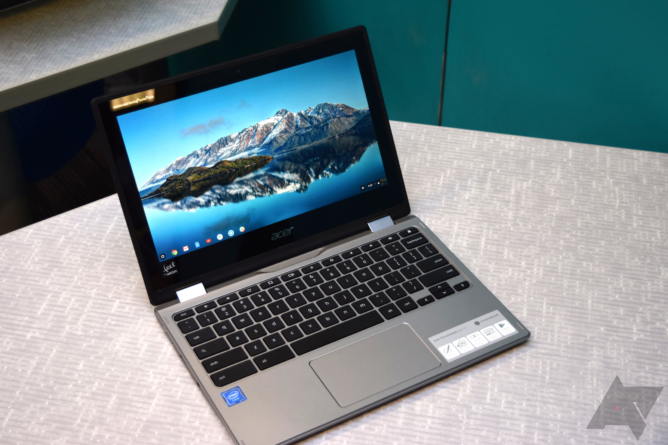 When it comes down to it, a Chromebook, while a simple machine, should be able to handle more than what this one can at this price. It's fortunate for me that I compulsively close tabs every few minutes, otherwise I think that I would have been a lot more frustrated with the Spin 11. It's fine for sitting on the couch, flipping in tablet mode, and browsing Amazon, eBay, or whatever, but any kind of "serious" work is better left to something else.

I typically have no problems recommending a Chromebook, but this is not one I'd feel comfortable telling family or friends to buy. Even for the "normal" consumer, this laptop is a dud for $350. If you're really set on this one, for whatever reason you have, wait for the price to drop.