The Play Store is home to all kinds of services you can subscribe to. Since January, Google's been testing a way to view all the apps you're paying a recurring fee for through Google Play. It's taken form as a convenient subscriptions center, accessible from the the left-hand menu in the Play Store on both mobile and desktop. Now, Google has announced several changes to the way subscriptions work on developers' end.

Subscriptions on Google Play are growing 80 percent year over year, Google says, so a way to manage them all will be handy for a lot of people. From the new center, you're able to view services you're subscribed to, see when they renew, manage payment methods, and cancel or renew them. 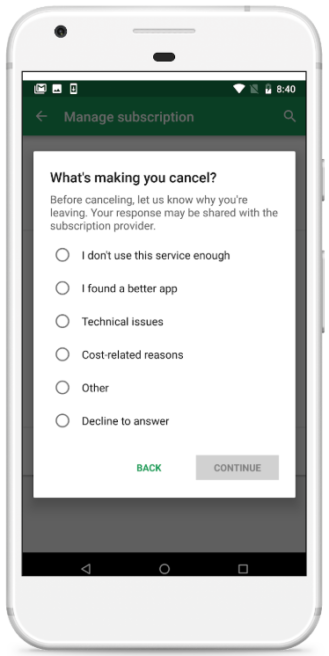 Canceling a service will now result in a survey about why you did so. Developers are also able to more easily institute price changes, triggering push notifications or emails to alert users. If a user doesn't agree to a price change by the time it would take effect, their service is canceled. This change is in addition to previously-instituted tweaks that make for simpler subscription upgrades and refunds.

As several astute readers have pointed out, the majority of the information about the end-user experience in this post isn't new. We've updated with additional developer-centric information about recent changes.