The days of phones with hardware keyboards might be mostly behind us, but there is a steadfast bunch that sticks to their desire for increased tactile feedback, and BlackBerry continues to oblige their interests. The much-anticipated KEY2 is one way the thumb-board warriors can get their fix without resorting to antique hardware, and they'll be glad to know their clicky-keyed savior is coming to the US on July 13th. For the impatient, presales open early on June 29th. 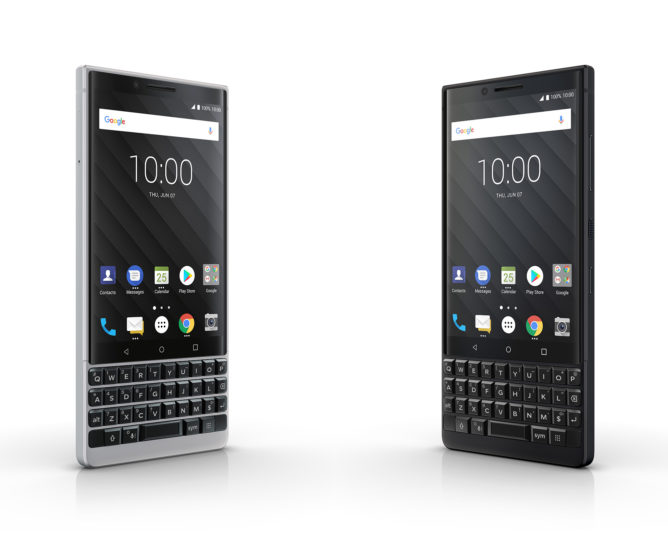 The KEY2 will be available for purchase unlocked for GSM carriers in utilitarian-titled "Silver" and "Black" colorways. The phone will be sold at Amazon and BestBuy, with in-store availability limited to select locations. Prices start at $649.99, and both Amazon and BestBuy will both be offering pre-orders beginning on June 29th so you can make sure you'll be getting one a full two weeks before the phone hits shelves.

In case you've forgotten, $649.99 gets you a Snapdragon 660, 6GB RAM, 64-128GB storage (microSD expandable), and a 4.5" 1080p-ish display. You'll also get dual 12MP cameras, Android 8.1 Oreo, and a headphone jack. The KEY2 also has BlackBerry's new Speed Key, a feature the company is very proud of, which provides you a customized hardware shortcut for apps and contacts.

Given the higher price and relatively lower-end specs, it might be worth it to wait on reviews before you jump straight into pre-ordering one.

IRVINE, Calif. – JUNE 21, 2018 @ 9AM EST – The newest and most-advanced BlackBerry smartphone yet is coming to the U.S. on July 13 with the launch of BlackBerry® KEY2; available carrier unlocked and in both Silver and Black color variants at Amazon.com, BestBuy.com and select Best Buy stores. Featuring an iconic BlackBerry physical keyboard and loaded with BlackBerry Limited’s best security and privacy enhancements, this all-new BlackBerry smartphone packs a number of features that are firsts for any BlackBerry smartphone. Running the latest AndroidTM 8.1 Oreo operating system, the BlackBerry KEY2 is the first ever BlackBerry smartphone to feature a dual rear camera. It also includes the introduction of Speed Key, a universal shortcut key that now makes it possible to instantly access the apps, contacts and functions you use most from anywhere on your device at any time.

BlackBerry KEY2 will be available carrier unlocked in both Silver and Black color variants optimized for GSM carrier networks such as AT&T and T-Mobile starting at $649.99 USD. Both Amazon.com and BestBuy.com will offer pre-sale of BlackBerry KEY2 starting on June 29.

You can read more about the BlackBerry KEY2 here: https://blackberrymobile.com/blackberry-key2-an-icon-reborn/.

“Although there are many different smartphones for consumers to choose from today, most tend to offer very similar experiences without much distinction from one to the next,” said Alain Lejeune, Senior Vice President, TCL Communication & President, BlackBerry Mobile. “With the introduction of BlackBerry KEY2, we’ve created a distinct smartphone that captures all the traits that have made BlackBerry smartphones iconic, while introducing new innovations and experiences that not only make this one of the best devices for security and privacy, but also the most advanced BlackBerry smartphone ever.”
“BlackBerry phones are the world’s most secure Android smartphones. We design them for security from the inside out and we’re proud to partner with TCL Communication on the launch of their all-new BlackBerry KEY2,” said Alex Thurber, SVP and GM of Mobility Solutions at BlackBerry. “BlackBerry has been iterating and perfecting our approach to mobile security for decades, and we’re excited to have this new genuine, modern
BlackBerry smartphone available for our fans around the world to enjoy.”