Verizon announced not a second, but its third "unlimited" smartphone plan yesterday, and it goes to show just how meaningless the term has become in the US wireless industry. Verizon's new "above" unlimited plan (the tiers are "go," "beyond," and "above" for those of you playing aspirational-marketing-nonsense-vocabulary at home) is basically America's Most Red Carrier deciding it can cash in on heavy data users to the tune of an extra ten bucks, making it $95 a month.

The "above" plan raises the unlimited (but obviously not unlimited) data cap to 75GB from 22GB, the mobile hotspot allowance to 20GB from 15GB, and tosses in five "TravelPass" roaming days per month. The roaming days, if you use them, actually make this a decent deal - they're $10 a pop otherwise, so if you're a Verizon subscriber frequently traveling outside the US, this plan could make a lot of sense for you. 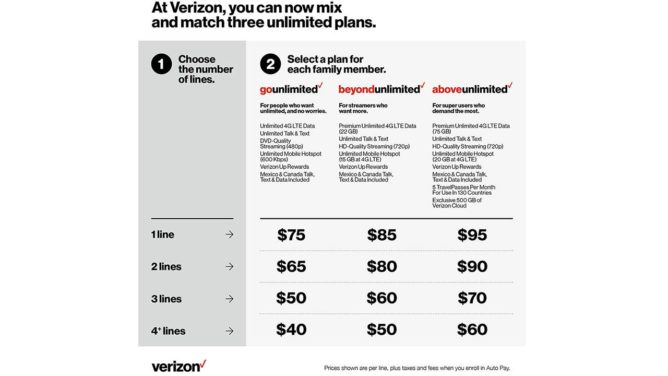 In fact, as the plan itself goes - aside from Verizon's 720p video throttling - there's nothing really all that bad about it. If you use more than 22GB of data a month, Verizon's no longer going to drop your speeds or throttle you into oblivion during congested hours, you'll just have to pay them a bit more. If you're using more than 75GB a month on your smartphone data plan, I sort of have to question what you're doing with it in the first place. 20GB of mobile hotspot is certainly nice, too.

But the practice of calling these plans "unlimited" is just so ridiculous at this point, it's beyond parody. The only thing that's unlimited is the bullshit, and Verizon and co. just keep on shoveling it our way.

You can sign up for the 'above unlimited' plan starting on June 18th.