Most home security cameras need to be plugged into power, but there are a few that made do with batteries. Even the best wireless cameras currently on the market need a recharge every couple months, but Eufy (an Anker company) has an alternative. The EverCam has a humongous battery that offers a full year of operation on a charge. You can't get one yet, but you can join the Kickstarter.

The EverCam is a 1080p security camera for both indoor and outdoor use. The camera itself is entirely wireless, but it doesn't connect to your regular WiFi network. There's a hub that you need to connect via ethernet. The camera communicates with the hub over a dedicated sub-1GHz connection, ramping up to 2.4GHz WiFi for transmitting data.

The use of a hub should allow it to conserve power, but the monster battery will help too. It has a capacity of 13,400mAh. The hub also has a battery backup (5,000mAh) to keep the system running in the event of a power outage.

This camera records in 1080p with a 140-degree field-of-view. The video is saved to an included 16GB microSD card. You can get a larger card, and there's an optional cloud storage plan for $2.99 per month (each camera). The EverCam campaign page tries to gloss over that point, and it also seems to imply that Arlo wireless cameras don't have local storage. They do, and they have free cloud storage, too. What Eufy is pointing out is that its local storage is encrypted whereas Arlo's is not. 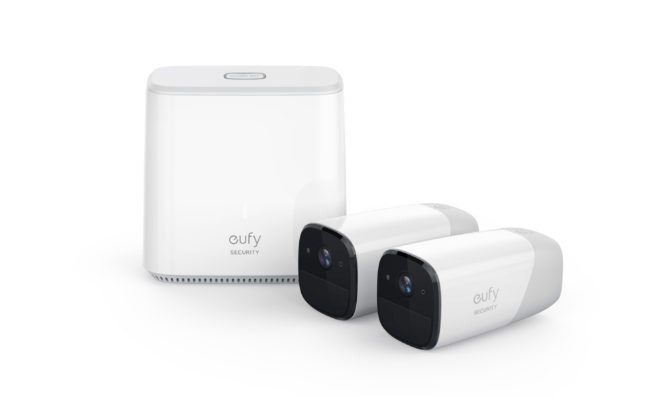 EverCam has long since blown through its $50,000 goal and is closing in on $200,000 as of this posting. You can get a single EverCam for $199 ($299 MSRP) or a pair of them for $299 ($499 MSRP). The usual warnings about Kickstarters apply here, so temper your expectations. The estimated delivery timeline is September of this year.

This is the last day of the EverCam Kickstarter, and it's been a huge success. With an initial $50,000 goal, the project is coming up on $3 million. The early bird deals are all long gone, but you can get a single camera kit with the hub and door sensor for $219. The other packages go up from there. You can also add extra cameras and sensors to any reward.

Eufy expects to deliver the cameras in September. With $3 million in the bank, hopefully it can stick to that timeline.