With the Pixel 2 release, Google enabled an automatic dark theme in the Pixel Launcher and quick settings. This was a bit of a half measure seeing as everyone has been begging Google for a dark system theme for years. Annoyingly, if you had a preference for the dark or light theme, you couldn't manually select it. That will change soon—possibly in the next Android P build.

As it currently stands, Google devices set the dark or light theme based on your wallpaper. If the image is predominantly dark, you get the dark theme. That includes dark folder icons, black quick settings, and a dark app drawer. If your background is neutral or light, you get the standard white UI elements. Back in March, someone added an item to the dev preview issue tracker asking for a toggle to choose the theme. Google has apparently acquiesced. 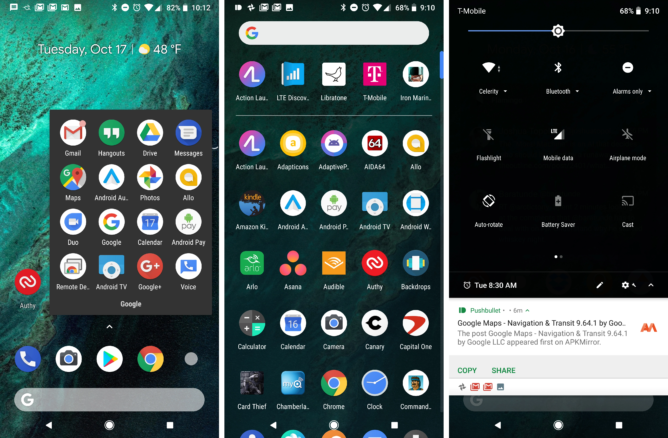 A Googler has marked the item as fixed in the bug tracker and replied with the following.

We have added support for a Dark theme to be applied to quick settings and launcher under Settings -> Display -> Device Theme. It will be available in a future Android build.

So, this is the existing dark theme—don't get too excited about the fabled dark system theme. You'll simply be able to go into the settings and set the launcher/quick settings theme so you can use whatever wallpaper you want with either theme.

It does sound like you can still leave the theme dependent on your wallpaper, though. It's also possible this will work on other phones with launchers based on the stock launcher3 code, but that's unclear. We might see this in the next developer preview, but at the very least it should be live by the time Android 9.0 rolls out officially.

Google Translate's offline accuracy will be improving soon, thanks to machine learning