Recently, we were contacted by a reader about a months-long ordeal with HTC attempting to get a U11’s defective USB port repaired, only to have it sent back to him four months later - badly reassembled with glue leaked all over the frame. That person sent the phone back in and, at the time we received the email, had been waiting three months for the second claim to go through.

It sounds like the sort of unfortunate - but generally rare - customer service story no one likes to deal with, but that does occasionally happen when dealing with a major corporation. Some people, through little or no fault of any one individual, fall through the cracks. At least, that would be the case if this were the first time someone had ever emailed us about this sort of thing. I recalled a couple of other cases we'd been contacted about over the last couple of years, and wondered if there was any data to support the idea that this was a real problem. 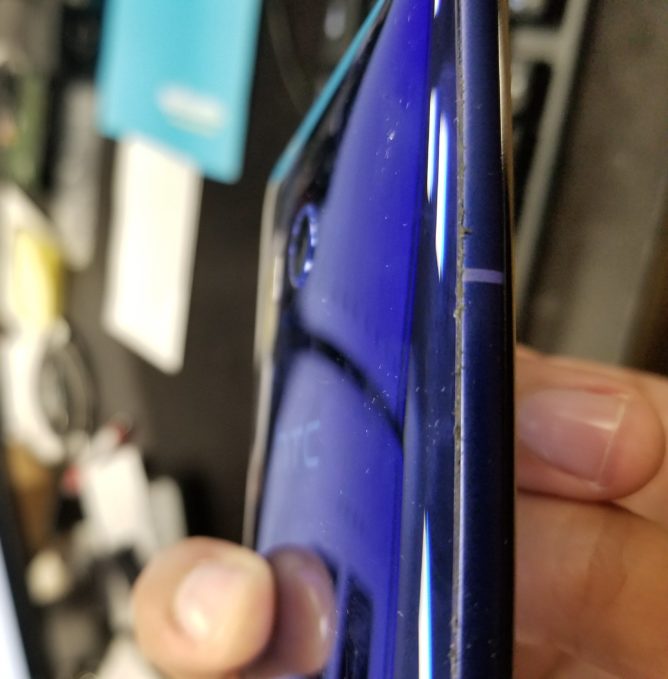 An image of the botched U11 repair we were sent - look at all that adhesive in the seam.

What we found was surprising - and not in a good way. In the past year, HTC has experienced a flood of customer support complaints across the internet describing similar (and sometimes worse) experiences. The US Better Business Bureau and sites like Consumer Affairs and Trust Pilot are littered with complaints about HTC losing or going silent on warranty or other repair claims, and it's at the point where something seems to be very seriously wrong.

My phone has been in repair with this company for 4 months now and no one is letting me know what is going on. Worse customer service ever. T.A - 10/2/17

...was told that it would be approx 2 week turnaround for repair once they had received my device. That was in June; it is now October 31st and I still do not have an ETA for my phone to be returned. All I'm being told is there is a supply issue with the replacement components. E.T 10/31/17

I have been battling with HTC for the past 4+ months on getting my device replaced that was still under warranty.  B.S. 11/24/17

Google referred me to HTC, and HTC suggested sending the device in for repairs. HTC received it in June 2017, and now, in December 2017, there is still no progress. I've spent countless hours talking to support in chats and phone calls... L.L. 12/8/17

They told me to send my phone in to their repair service center. That was in September 19th; it is now December 27st and I still do not have an ETA for my phone to be returned. K.S. 12/27/18

purchased an HTC 10 and was told they would have it 7-10 days. It has now been 2 months and all I get is Fernando in the Phillipines running interference and giving no real answers. Corporate number has not worked for over a month. S.P. 1/8/18

I have been back and forth with their team for 8-9 months on my return and have had no luck - nothing but lies and false promises. "RMA" keeps saying my phone is on back order.  H.G. 1/15/18

8 weeks to get my phone repaired WITHOUT a replacement. Insane! terrible customer service. S.D 3/1/18

I sent a phone to be repaired, it never got repaired, then HTC sent to still-broken phone to the wrong person. So, now I’m out of a phone and $600. After nearly 100 days with no progress on my phone repair, I asked that it be returned to me. A.D. 3/16/18

It is unacceptable for a major phone manufacturer to hold a phone for over 2 months without even supplying a reason for the delay or an estimated return date! B.G. 4/16/18

Have been waiting for over 12 wk for information on my M10 sent to CTDI in Flowermound,TX for warranty repair.  D. 5/7/18

This is just a small selection from the Better Business Bureau's review section (HTC gets an "F" rating from the BBB, by the way). Many dozens more describing similar issues can be found in the complaints area, as well as on sites like TrustPilot and Consumer Affairs. What's troubling is not that HTC is receiving complaints - Samsung, LG, Motorola, and others all receive many complaints on websites like these. The problem is that HTC's complaints consistently cite a very similar and extremely concerning series of events: phones being sent in for repair, not getting fixed for many months (and, frequently, never getting fixed at all), and customers being left with no recourse but to ask for their broken phones back.

It's one thing for a company to deny warranty claims, botch a repair, or send a customer a badly-refurbished replacement handset. It's completely another to leave customers in the dark and essentially hold their phones hostage while waiting for repairs that quite often just don't seem to happen. Given how far back reports of these concerns date, this is clearly not some small logistical issue where a few customers are getting lost in the cracks - it's a fundamental failure to provide product support.

While there are a few positive reports about service here and there for HTC, this really isn't a good look, and it's pretty hard to recommend HTC's phones when this sort of thing appears to be increasingly widespread. Have you had a poor experience with HTC's customer service in regard to getting a device repaired or replaced? Let us know in the comments.

We reached out to HTC for comment on this story and will update if we receive any.