The new YouTube clusterfuck was announced about three weeks ago, but not many changes have occurred yet. The YouTube Music app has been updated, but YouTube Red branding still hasn't been switched to YouTube Premium, and the YouTube Music web player still showed "coming soon" for almost everyone. It looks like some of that may be about to change, though.

We received two separate tips regarding YouTube Music today. The first came from Daniel, who sent along the screenshot of the YouTube Music web player that you see in the hero image above. He received a "Welcome to the new YouTube Music" email, exactly like the one you see below. For what it's worth, he's the manager of a family plan as well. We're seeing reports around the web of a few others getting access to the web player as well, so this isn't an isolated instance. 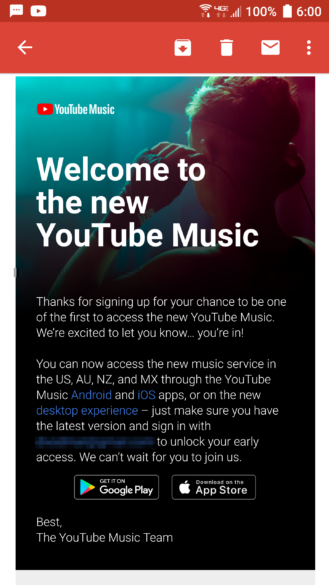 The second came from a reader named David, who received the same email (the one pictured above). However, David is unable to access the YouTube Music web player, and is still being greeted with the standard "coming soon" page. It's a confusing situation, but he seems to be in the minority.

Let us know if you've received an email and/or been able to use the YouTube Music web player (music.youtube.com). It's worth noting that your Play Music library still won't have been migrated over, which isn't ideal.