Android gaming phones might not appeal to many people, but they must be selling well enough as companies continue to make them. The Razer Phone was last year's high-profile launch in the sector, and this year we've also seen efforts from Nubia and Xiaomi. Specialized ASUS brand Republic of Gamers (ROG) has just unveiled its own competitor at Computex 2018.

The ROG Phone boasts an exclusive Snapdragon 845 SoC with a higher clock speed (2.96GHz, Qualcomm's fastest ever), along with the world's first 3D vapor-chamber cooling system and an additional snap-on cooler. A lot of gaming phone features tend to sound like overkill, but ASUS has clearly decided to really go for broke with the ROG Phone. 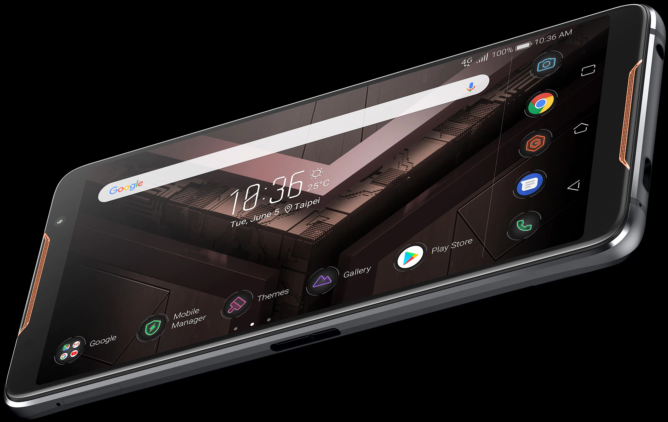 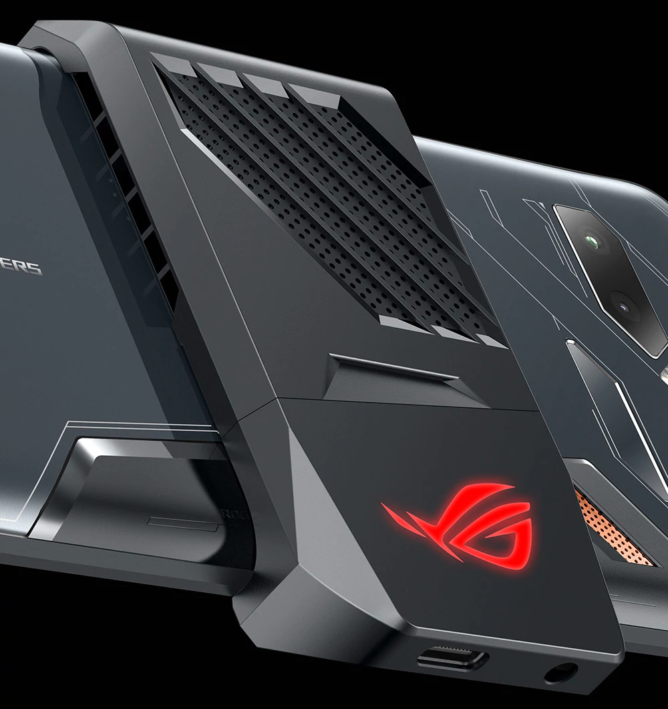 Other impressive sounding specs include a specially-optimized Adreno 630 GPU and a 6" AMOLED HDR display with a 90Hz refresh rate and 1ms pixel response time. Ultrasonic AirTriggers give you programmable shoulder buttons (when the phone is held in landscape) that free up screen space for immersive action. The additional cooler attachment provides an extra Type-C port and headphone jack on what is the bottom edge of the phone in landscape, making it easier to play and charge at the same time. ASUS ROG also announced various other new gaming products at the event, including a new laptop and router. Some accessories that work with the ROG Phone were also shown off, such as the Delta Type-C gaming headset and desktop dock so you can play mobile games with a keyboard, mouse, and monitor if you wish.

The ROG Phone will be available "shortly" in two configurations, with either 128GB or 512GB of storage. Pricing information hasn't yet been announced, so we'll have to wait and see how (un)affordable this phone ends up being.

LONDON, (June 4, 2018) — ASUS Republic of Gamers (ROG) today hosted the For Those Who Dare press event at Computex 2018, unveiling a new lineup of gaming products, including ROG Phone, the first ROG gaming smartphone and the world's first smartphone with a 3D vapor-chamber cooling system. ROG also announced ROG Rapture GT-AX11000, the world’s first tri-band 802.11ax router with Wi-Fi speeds of over 10,000Mbps, and introduced products in other brand-new categories, including the ROG Ryujin and ROG Ryuo CPU coolers and ROG Thor 1200W Platinum power supply. Rounding out the press event were the announcements of the ROG Delta gaming headset and the ROG Strix SCAR II and ROG Strix Hero II gaming laptops.

ASUS Chairman, Jonney Shih, leading the presentation onstage, shared his enthusiasm with the expansion of the ROG product line saying, “Today is a celebration of those who dare to be different. Twelve years ago, ROG was founded out of our desire to create a full lineup of ultimate gear designed for gaming victory. Now, through the dedication of ROG engineers, designers, professional gamers and enthusiasts around the world, we have achieved these goals and distilled them into the essence of ROG. We will carry this spirit forward as we strive to create the next generation of gaming innovations.”

With pure ROG gaming DNA at its core and powered by the world’s fastest 2.96GHz octa-core Qualcomm® SnapdragonTM 845 Mobile Platform with a gaming-optimized Qualcomm® AdrenoTM 630 GPU, ROG Phone breaks every rule to go where rivals fear to tread. Don McGuire, Vice President, Global Product Marketing, Qualcomm Technologies, Inc. spoke onstage, highlighting the long-term partnership between ROG and Qualcomm Technologies, Inc, a subsidiary of Qualcomm Incorporated1. “Qualcomm Technologies and ASUS have enjoyed great successes over many years and we are thrilled to be at the core of their newest cutting-edge device, the ROG Phone," said McGuire. “Our entirely re-architected Snapdragon 845 Mobile Platform with the gaming-optimized Adreno 630 GPU is designed for speed, minimizing thermal throttling and maximizing battery efficiency so users can play longer. Snapdragon 845 is engineered to deliver an unparalleled gaming experience; supporting exceptional performance, fast and smooth graphics, and Gigabit speeds whether on LTE or 802.11ad Wi-Fi.”

ROG has also partnered with Garena — developer of one of the world’s best-ranking survival shooter games: Free Fire — to explore the endless possibilities that ROG Phone brings to the gaming scene. Andrew Manugian, Head of Business Development, Free Fire Global Publishing, was also onstage to provide details about the partnership. Finally, SMG, professional esports gaming team and world champions in Arena of Valor, came onstage to share their experiences with ROG Phone and its benefits for mobile gaming.

In addition to the partnerships dedicated to creating the best gaming experiences, ROG also announced the new ROG Delta gaming headset that can be connected with ROG Phone and other smartphones via USB -C to make mobile gaming more compelling and immersive. ROG Delta features an ESS quad-DAC and drivers with audio signal diversion technology for clear, detailed sound that gives gamers the ability to better pinpoint in-game opponents.

Another groundbreaking announcement during the event was ROG Rapture GT-AX11000, the world's first tri-band 802.11ax Wi-Fi router that delivers networking speeds that gamers have only dreamed about until now. ROG Rapture GT-AX11000 is capable of delivering wireless speeds of up to 11,000Mbps for the best online gaming and general networking performance.

ROG is not only focused on being the leader in the gaming market, but also on expanding product lines to provide gamers more gear to enhance their gaming experiences. ROG Ryujin and ROG Ryuo are the first CPU coolers from ASUS Republic of Gamers and the world's first liquid coolers with an embedded 1.77 inch LiveDash color OLED display for displaying real-time system stats and personalized GIFs. Marking another entry into a new product line is ROG Thor 1200W Platinum, a 1,200 watt power supply with an IP5X-certified 14mm wing-blade fan and Aura Sync.

In addition to the products announced onstage, the For Those Who Dare press event also featured a demo area showcasing other new products, including ROG Balteus Qi, a RGB gaming mouse pad with a hard surface optimized for precise tracking and Qi wireless charging; ROG Gladius II Wireless, an ergonomic optical gaming mouse with dual wireless connectivity via 2.4GHz and Bluetooth; and ROG Strix Chassis with an enticing aluminum and smoked-glass design and support for addressable AURA Sync lighting technology.

A comprehensive lineup of ROG products will be on display at the Taipei Nangang Exhibition Center at booth #M810 on June 5–9, from 9:30 a.m. to 6:00 p.m.2Visitors to Computex 2018 are invited to visit the ROG booth to experience the latest ROG gaming innovations for themselves.

Full listing of ROG products shown at the press event

ROG Rapture GT-AX11000 provides triple-level game acceleration to boost game traffic from the device to game server. A 2.5-Gigabit gaming port prioritizes the device connected to it with 2.5X faster transmit speeds, a perfect match for motherboards with 5 Gigabit LAN. A physical button built into the router allows users to turn on and off Game Boost mode for prioritizing gaming traffic on the network for even better gaming performance without the need to use a web interface or mobile app. It can also activate the DFS band. Gamers Private Network (GPN) support ensures the shortest connection route between the user's home network and the game server, for the lowest ping times and latency.

ROG Balteus Qi is an RGB gaming mouse pad that combines a performance surface with the convenience of Qi wireless charging on the desktop. A 370 x 320mm portrait-oriented surface offers ample space for simultaneous charging and gaming, while the micro-textured hard surface enables pixel- precise tracking. Featuring 15 individually customizable Aura Sync RGB lighting zones for personalization, the mouse pad is also equipped with an on-pad lighting mode button for on the fly adjustments and a USB 2.0 passthrough port for easy connections. Apart from ROG Balteus Qi, its sibling the Balteus will also be available for gamers who want the extra flair but without the wireless charging function.

ASUS ROG PRODUCTS will be available shortly in the UK. Please contact your local ASUS representative for further information.

[Update: Amazon too] Deal alert: Google Pixelbook down to $749 ($250 off) at several retailers