Google has been doing an impressive job of pretending Android tablets don't exist for the last few years, and now it's done pretending. Google has updated the Android website to remove the tablet section entirely. You can now use that site to learn all about Android on Phones, Wear, TV, Auto, and Enterprise. That's it. RIP Android tablets.

As of yesterday, the tablet section still existed. You can see the last version of the page in the Internet Archive. It talked about hot new tablets like the Shield and Galaxy Tab S2. So, yeah. It wasn't getting much attention even before Google killed it. Now, if you try to visit the URL for the tablet page, it kicks you back to the main Android site. 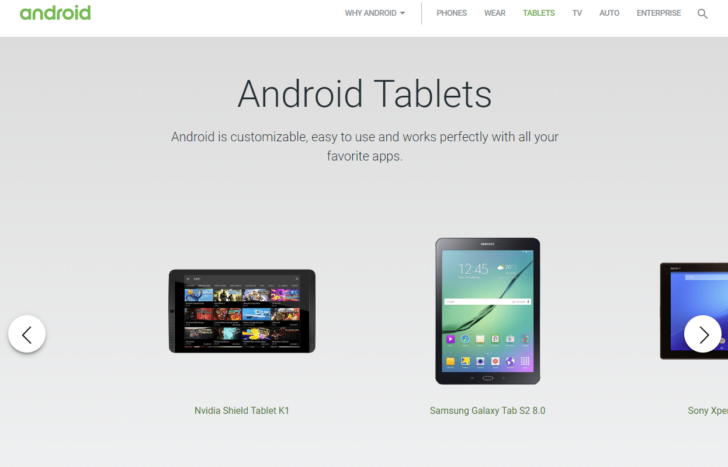 The page as it appeared on May 31.

We've talked repeatedly about Google's lack of interest in Android tablets, culminating with the absence of any Android P dev tablets. If that's not evidence Google is done with Android on tablets, the purging of tablets from the Android website certainly is. So, what's next? My money is on Chrome OS tablets with Android apps. With Google's disinterest in Android slates, it's hard to see how partners like Samsung and Asus can keep making them.

Oops we had a bug when we updated the site. It's back up now. Sorry for the confusion! https://t.co/5mI3L3Gzif

According to a tweet by Hiroshi Lockheimer, the removal of the tablets section of the Android site was the result of a bug during a recent site update. We can confirm that the missing section has now been restored—even if it's still advertising such dated specimens as the Galaxy Tab S2 8.0.

Protect your LG G7 with a slim and protective Spigen case - From $7.99 [Sponsored Post]