T-Mobile has resumed its rollout of Android 8.0 Oreo for the LG V30 and V30+ almost three weeks after it was halted. You'll need to be running the latest version of the McAfee Security for T-Mobile app (version 4.9) to get your hands on it.

T-Mobile originally rolled out Oreo for the V30 and V30+ on May 7, giving users the ability to upgrade through the LG Bridge platform, or by manually downloading and installing the OTA package. However, following multiple bug reports, the rollout was paused on May 12.

It seems those bugs have now been quashed, and Oreo is finally available to download again. The release includes the Android security patch for April and comes with software version number H93220h. In addition to all the Oreo goodies you would expect, the update also includes the AI camera feature first introduced with the V30 ThinQ.

You should get a notification when Oreo is available to download on your LG device, but if you'd like to check for it manually, you can do so by going into Settings -> About phone -> Software updates -> Check for updates. T-Mobile says that updates are "briefly set on a scheduled daily limit" to prevent network congestion, so if you can't download Oreo right away, try again a day later. The daily limit will be lifted on July 3. 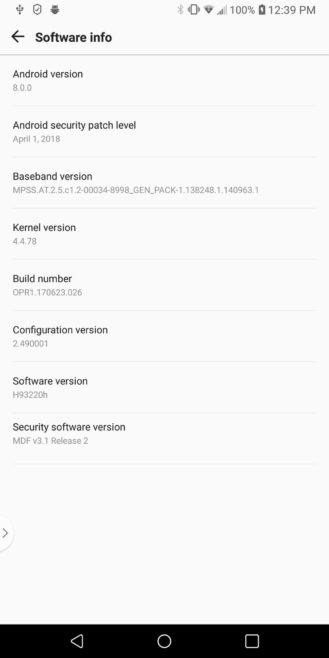 Oreo for the V30 series has already rolled out to customers on AT&T, Sprint, and Verizon. This makes T-Mobile the last of the four major carriers in the U.S. to release it, but it's better late than never.