Google recently announced that it was replacing its current non G-Suite Google Drive storage plans with a new pricing structure called Google One. All your stuff will stay in Drive and other Google products as before, but you might get to pay slightly less depending on how much space you need. Google One now has an app in the Play Store, but it won't do anything until the service goes live sometime in the next couple of months.

The base-level storage plan is still 100GB for $1.99 per month (or $19.99 per year), but after that things are changing a little. The next level up was 1TB, which would have been excessive for many. With Google One, a new 200GB plan will be available for $2.99 a month and the 1TB deal is replaced by 2TB for the same price of $9.99 a month. These should better reflect people's needs today, and hopefully save some people some money. 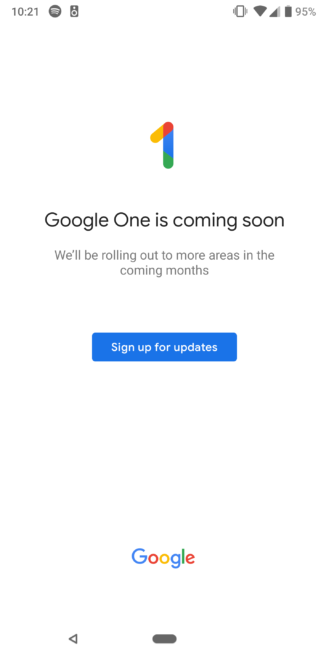 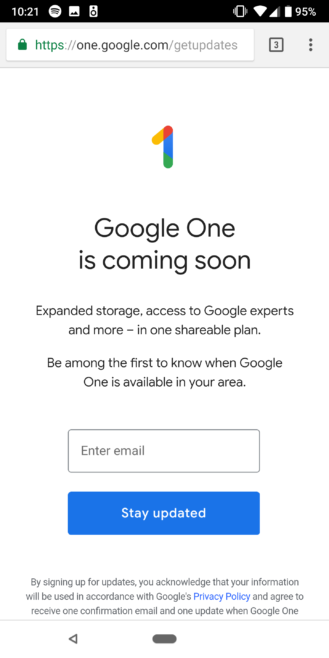 The app (left) doesn't really do anything yet.

To help you manage your storage, of course, there's an app — and it's now live on the Play Store. Since the service isn't live yet, it doesn't do anything other than produce a landing page with a link to a webpage where you can sign up for updates. The screens on the Play Store show us what to expect, though, with an overview of how your storage is being used up across your Google products and any family members you're sharing it with (up to five), plus contact links so you can easily get in touch with support.

Member benefits such as Google Play credit and discounts on hotels will also be accessible in the app. That's about all we can say about it so far, since it isn't fully functional just yet. 9to5Google did spot something interesting, however, in that the app's package name ends with "subscriptions.red." This suggests the Red subscripction branding previously used by YouTube (which will now be called YouTube Premium) was also intended for Google One before a change of heart.

We've also got this first version of the app on APK Mirror if you want to take a look for yourself.

Emails are starting to go out to some users stating that their Drive plans have been transitioned to the new Google One. Thanks, Michael! 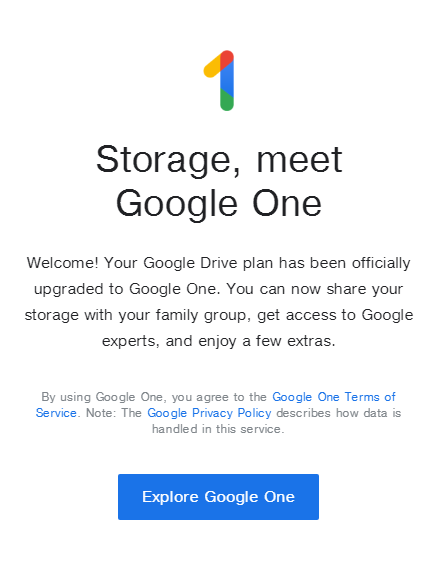 Once that happens, the Google One app will let you sign in to see details of how your storage space is used by service and person (if you have a family plan), the different benefits you get, plus you can contact support and change some settings regarding your plan, payment method, notifications, and more. Thanks, Alex!