Android tablets may be dying out in the consumer market, but you might be seeing more of them if you live in New York. Curb Mobility announced on Thursday that its fleet of NYC taxis will soon be updated to include not one, but two Android tablets. 'Dash' will replace the legacy digital meters currently in use by drivers, and 'Ryde' will display media content for passengers. 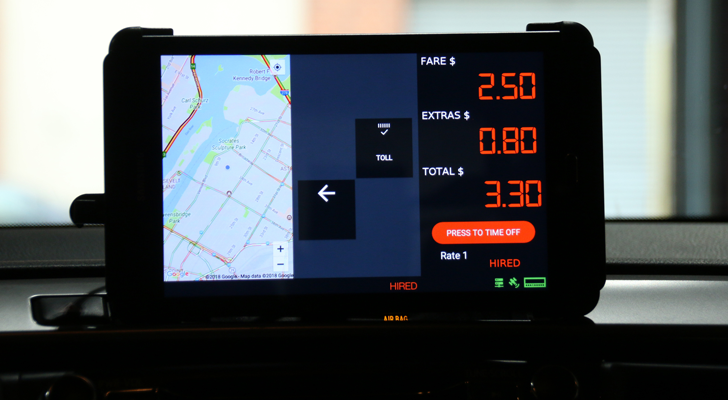 Android seems to only be used as an embedded OS in this case, as it doesn't look like much (if any) of the stock interface is visible to the user. Still, if you can't snag an Uber driver with an NES, this isn't a bad alternative.

RIDE PROVIDER CURB ROLLS OUT NEW IN-CAB
TECHNOLOGY TO REVITALIZE NEW YORK CITY TAXIS
NEW YORK — MAY 24, 2018 — Curb Mobility (www.gocurb.com), the modern provider of for-hire rides in North America and the United Kingdom, today announced the launch of a new initiative to equip New York City’s taxis with cutting-edge technology for both drivers and passengers. Aimed at modernizing the yellow cab, Curb is introducing two new Android tablet solutions to level the playing field for the city’s most iconic industry.
DASH is a digital meter that replaces bulky legacy taxi systems with a single lightweight tablet providing drivers with a user-friendly interface and feature-rich tools like multi-language support, GPS navigation, live traffic information, and an emergency panic button. DASH will also help increase drivers’ earning potential with such features as fare heatmaps to help drivers find more rides and flat, upfront ride pricing to attract more riders during times of low demand.
RYDE is a new passenger-facing 10-inch tablet that pairs with the DASH system and gives riders an interactive experience to make commutes more enjoyable. Also running on the Android platform, RYDE will support a variety of third-party apps, including an upcoming successor to the current Taxi TV media platform. The RYDE system unlocks new possibilities for brands and advertisers while introducing passengers to a new generation of in-cab entertainment.
“Yellow cabs are part of the fabric that makes this city so vibrant and distinctive. In the face of disruption, there is a unique opportunity to modernize and enhance the taxi experience for both sides,” said Amos Tamam, CEO of Curb. “By empowering drivers with tools that make their job easier and more profitable, they’ll be able to focus on providing the utmost service to their riders.”
Curb is already piloting its new in-cab technology with dozens of taxis throughout the city and will begin a mass rollout next month. Tamam adds, “This new initiative marks a turning point for taxi owners and operators. We still have a lot to accomplish but we’re excited to bring this impactful technology to the people who need it most.”
DASH and RYDE are the latest additions to Curb’s integrated suite of mobile solutions, including ride-hailing, shared rides, and Pair & Pay mobile payments. Powering over 700,000 trips per month in New York City, Curb is generating over $100 million per year in additional revenue for hard-working Yellow and Green taxi drivers on the Curb network.

Google Lens is rolling out in French, German, Italian, Portuguese, and Spanish