Razer launched its first smartphone last year following the acquisition of Nextbit. However, the Razer Phone had a few issues at launch, including a mediocre camera. It's getting better, but it's far from being the best. As part of improving its camera performance, Razer is rolling out a new update today that adds a portrait mode, plus there are new security patches and other goodies.

Portrait mode is all the rage lately—so much so that OnePlus included a 20MP camera on the OnePlus 6 just for that purpose. Now, the Razer Phone can use its dual camera array to create blurred backgrounds in your photos. The update also lets you lock items in the recent app list, and it fixes the multitouch bug from Android 8.1. 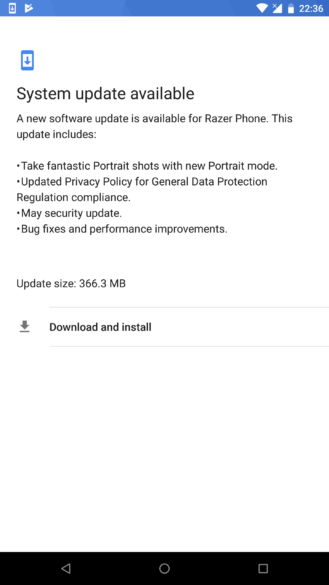 The OTA should be available for all phones right now. There's also a new factory image on the Razer site if you want to flash that instead.

HTC accidentally leaks the pricey U12+ not once, but twice