Everyone knows you should keep a spare tire in the trunk of your car, and possibly tools like jumper cables and scissor jacks. Dashcams can be just as helpful as those, but many American drivers never install one. This can be for many different reasons — most them are ugly, the driver thinks they don't need one, and so on.

Anker makes a few car-related products under its 'Roav' brand. We already reviewed the Roav Viva car charger with Alexa, but Anker also produces several dashcams. The C1 Pro (R2120) and C2 Pro (R2220) have been on the market for nearly a year, currently priced at $106 and $140, respectively. Both offer more functionality than the average cam, like GPS and connecting to your phone for transferring videos.

So the question is, are Anker's feature-packed dashcams worth the premium price? I think so, but each camera definitely has its own set of problems.

Artem (owner of this site) also received review units of both cameras, and the suction cup on his C2 Pro has started to fail, thus causing the camera to fall. The C1 Pro does not suffer from this problem, since it uses 2M tape. 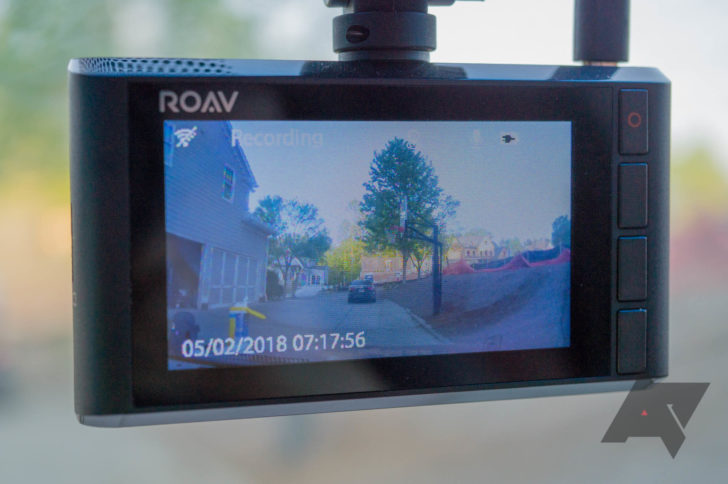 I'll start with the C2 Pro. It looks like a typical point-and-shoot, with a nice brushed metal pattern on the front. Not that you're going to be looking at the front very often, but it's the little things that matter.

There's nothing on the bottom of the C2 Pro except some air vents. There are more air vents on the top, along with a power button, microUSB port, and the mount connector. The mount has a suction cup that attaches to your window, with a passthrough for the charging port. You plug the C2 into the mount, and then run the power cable from the mount to a USB port. 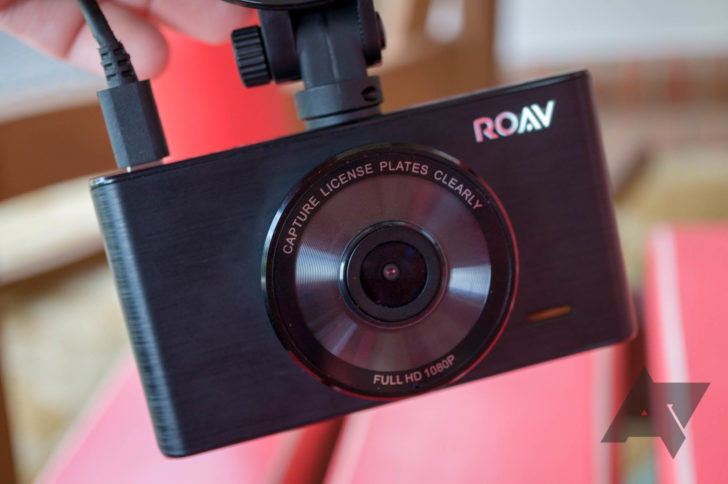 While it's not quite as sleek-looking as the C1 Pro, I definitely prefer the C2 Pro's suction cup mechanism to the C1 Pro's double-sided mounting tape. Once you lock the C2 Pro in place by twisting the mount, it stays firmly in place, and you can always unlock it and move the camera somewhere else. There's no residue left on the dash. 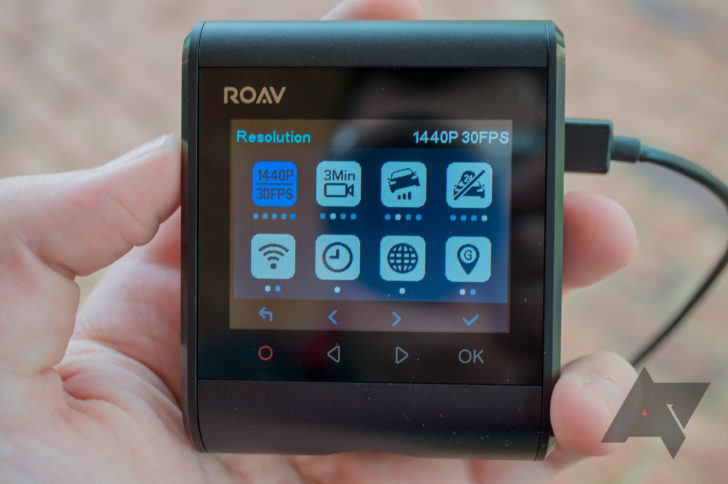 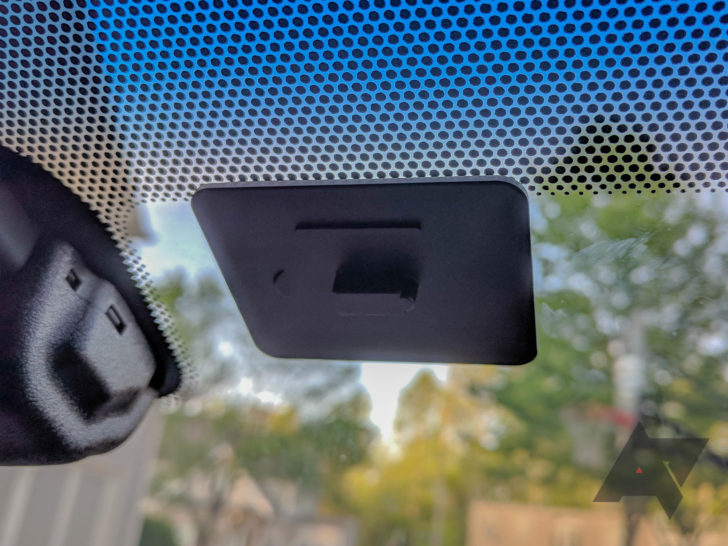 The C1 Pro has a completely different design. It's mounted on the window directly, instead of held up by an arm. You can detach the camera from the mounting plate (the camera just slides on), but moving the plate requires sticking a new adhesive pad on your window. There's only one spare included in the box.

As you can tell, the C1 Pro is much more compact, and generally looks nicer than the C2 Pro. While the former looks like a 2008 point-and-shoot hanging from the roof of your car, the latter keeps out of view. It's slightly harder to navigate menus with the smaller screen and capacitive buttons, but I think those are acceptable trade-offs. 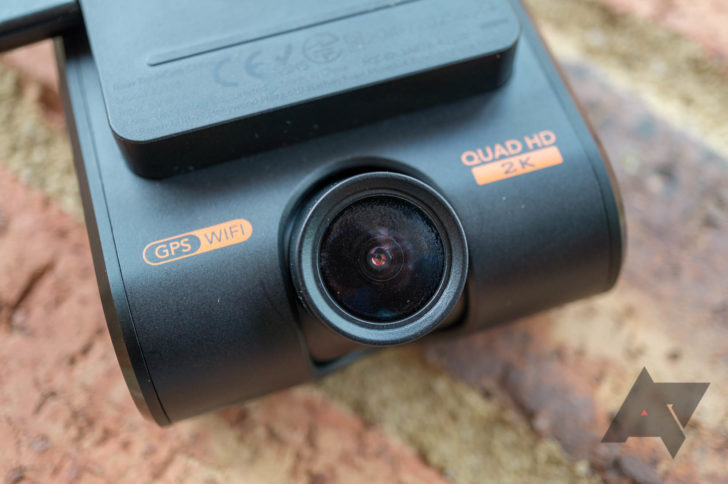 Both cameras have microSD card slots for saving recordings, and come with 32 GB cards. My C2 Pro didn't come with a card, but the version currently sold on Amazon does.

If you live in a hot place, or you leave your car outside most of the time, heat is something to take into consideration. The C1 Pro is designed to withstand temperatures of -10°C to 65°C (14°F to 149°F) and the C2 Pro can handle -20°C to 70°C (-4°F to 158°F). If your car's cigarette lighters don't turn off when the car does, you may want to consider unplugging the cameras if your car will be off for sustained periods. Artem noticed that after the C1 Pro was left on for two days in 80°F weather, the camera became very hot and displayed SD card errors.

Both cameras have the an identical setup process - just enter the date, time, and other basic information. After that, you have to figure out where the dash cam will go and how to hide the power cable. In my case, I stuck both cameras behind my rear view mirror, and ran the wire through the roof until it reached the side. 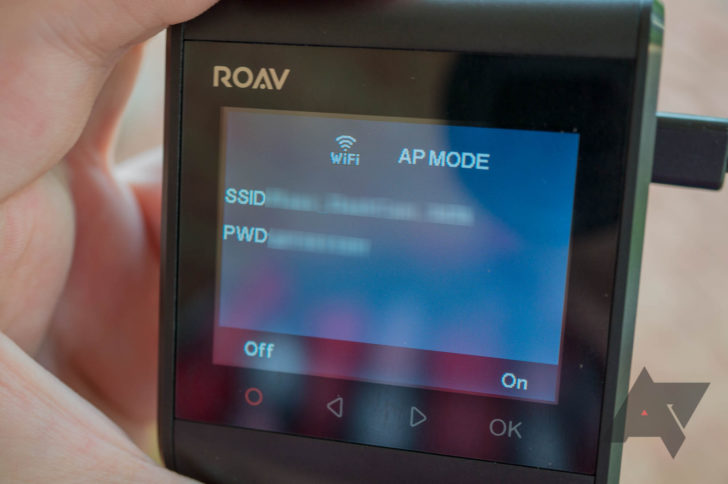 Then I taped the wires to the side wall on the passenger side, and ran the remaining cable under the floor mat. Not the prettiest setup, but the cables that came with the cameras were just long enough. Artem also tried both cameras, and the included cables were not long enough to reach the cigarette lighter in his car, so your mileage may vary (pun intended).

Once you put in a microSD card, the cameras will start recording when you turn your car on, and stop once your car turns off. That's assuming your car's cigarette lighters shut off when the car does - otherwise, the cameras will just keep running. Both models have a small rechargeable battery, so they can properly save the video file before shutting down.

One of the main selling points for both cameras is the Roav mobile app. Once you turn on Wi-Fi from the settings (it's not on all the time), you can connect to both cameras using the app. This allows you to transfer video to your phone, adjust settings, and more. 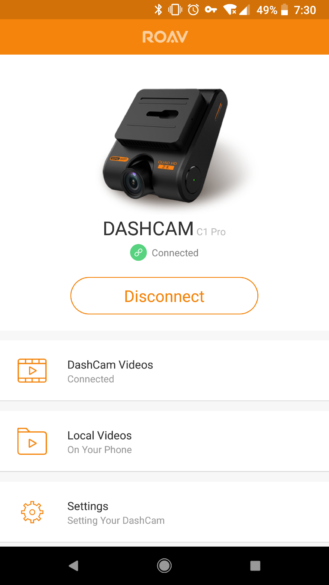 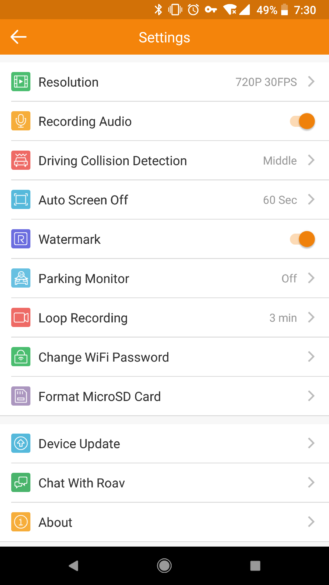 The app works well enough - videos are organized chronologically, and watching footage usually works fine. There is occasional stuttering, as the data transfer speed maxes out at around 2-3 MB/s. The app also displays an overlay on videos, showing the current speed and other data. This isn't part of the video file itself, so you won't see it outside of the app. However, both cameras save current date and time on recordings. 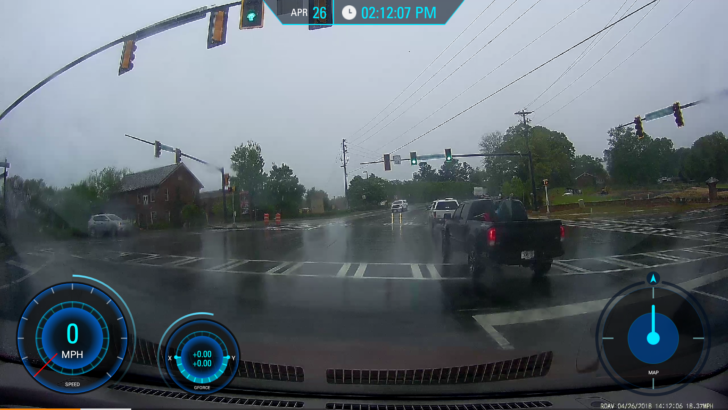 The slow transfer speed is my main problem with the app. Unless you lower the video quality or reduce the max time per video clip, copying files from the camera to your phone over Wi-Fi is incredibly slow. You also can't switch to another app, or the file transfer will stop.

If you're going to be frequently grabbing videos, it might be best to buy a USB OTG cable and plug the camera directly into your phone (or take out the microSD card). For the record, Anker's engineers told us the transfer speed is limited because of how Android handles ad-hoc networks. 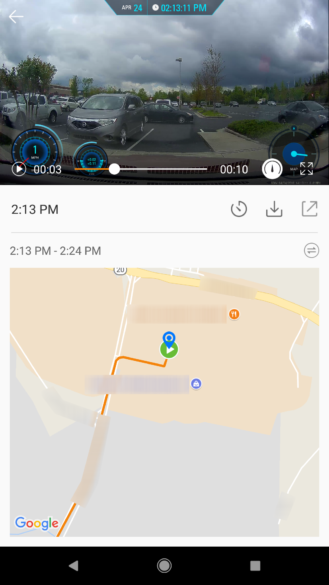 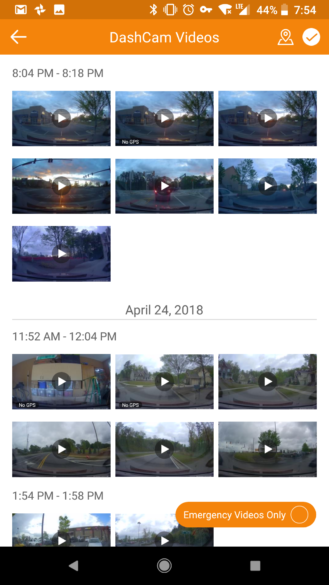 The app also pointed out a major problem with the C1 Pro - the GPS doesn't always work. As you can see in the right screenshot above, some recordings from the C1 Pro show "no GPS." Anker told us that because the GPS module is contained inside the device, reception is usually poor. The C2 Pro doesn't have this problem, because the GPS antenna is in the arm and isn't subject to the same interference.

Overall, the app is a nice touch and definitely brings some added value to both cameras. It does have limits, specifically the transfer speed, but I didn't experience any bugs or crashes. I wish it looked a little more like an Android app, though. 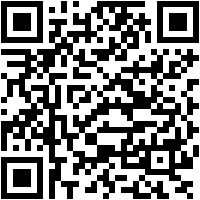 As you may have guessed, the video quality is one of the main differentiating factors between the C1 Pro and C2 Pro. The C1 Pro uses an OV 4689 sensor with a maximum resolution of 1440p 30FPS, while the C2 Pro uses a Sony Exmor IMX 291 and can only record at 1080p 30FPS. You can reduce the resolution in the settings, but I don't see why you would want to. 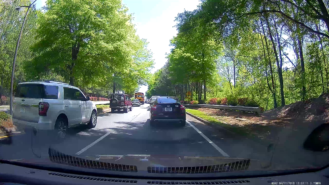 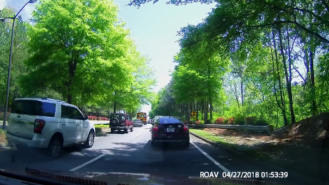 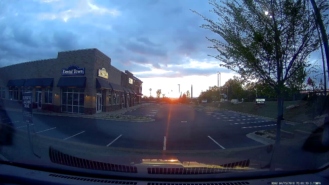 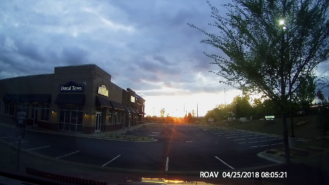 Generally speaking, recordings from the C1 Pro look decent, and videos from the C2 are just okay. The C1 Pro has better exposure and color balance, while videos from the C2 Pro have washed out colors. License plate numbers are readable from both cameras, as long as the car in front of you is close or not moving. Both dashcams will be good enough for recording incidents, but the C2 Pro's video quality really should be better to justify the $140 price tag.

Here's a sample video recorded from the C1 Pro:

Here's the same recording from the C2 Pro:

And finally, here are both recordings side by side:

I also drove at night a few times, but by the time I offloaded the recordings to my computer for this review, the C2 Pro had recorded over it (I was using a 1GB microSD card). So instead, please enjoy this footage from 'US Dash Camera':

Note: The C2 Pro has a slightly better image sensor than the C2 from this video.

In summary, while the C1 Pro is definitely better overall, both cameras will work just fine for showing police how an accident happened. 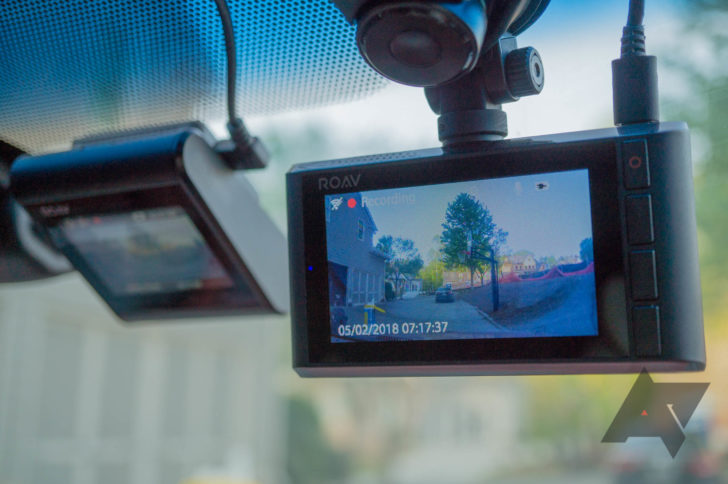 Generally speaking, both of these cameras are good. Not amazing, but not terrible. They'll do a fine job recording the road 24 hours a day, they don't look too ugly (especially the C1 Pro), and the ability to view and download footage over a Wi-Fi connection is nice to have.

Unfortunately, each camera has its set of disadvantages that you have to take into consideration. GPS is spotty on the C1 Pro, so you can't rely on it. The C1 Pro's mounting solution allows it to have a slim profile, but it also means you can't easily move the camera around. GPS is perfectly functional on the C2 Pro, but you have to deal with lower video and audio quality, not to mention the bulkier design.

It's hard for me to say which model is best for you, because only you can answer that question. For most people, I would suggest the C1 Pro. Spotty GPS is annoying, but the slimmer profile and higher video quality are major advantages. It's also cheaper, since it has been available for about a year.

I hope Anker can address the issues I've mentioned with future models. In the meantime, these are still good products that cover all the bases (and a little more), and I think the price premium over typical cams is generally worth it.

This review is of the 'Roav C1 Pro' and 'Roav C2 Pro.' Anker still sells cameras called the 'Roav C1' and 'Roav C2,' which do not have Wi-Fi or GPS connectivity, so don't confuse them with the models from this review.