Google told us about a great many things at I/O that are coming to many different products across the Google family, but one big service wasn't mentioned: Google+. We've been waiting for a while to see some changes in the company's only true social network, and now there's actually something to look forward to. A teardown of the APK points to a significant enhancement to the text formatting features already available to users.

Let's quickly run through a couple of changes that do exist in this update. 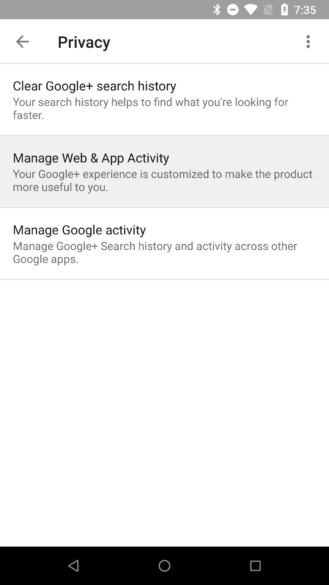 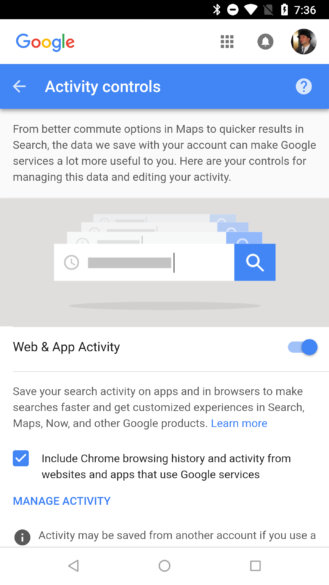 Open up the Settings screen and drill down into the account settings and look for the Privacy section. In there, you'll see a new link to 'Manage Web & App Activity' that opens Google's Activity controls page in a web view. This is just a shortcut from the app to a page served by Google.

This change probably would have been made eventually, but like many apps and services, it was likely prompted by the European Union's GDPR going into effect. 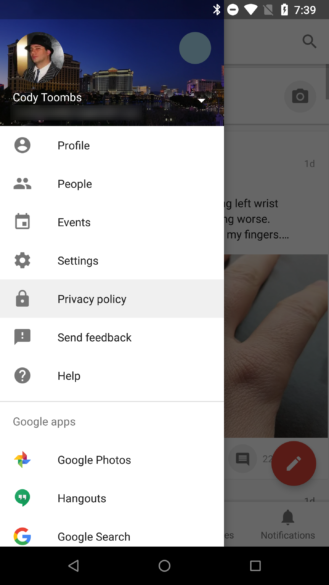 In the same thread, there is now a link to the privacy policy sitting in the navigation drawer – exactly where everybody needed it to be.

Let me just begin by saying that I had two major complaints about Google+ on the day it launched, June 28th(-ish), 2011. The first complaint had to do with the service falling into the same trap as every other by giving users no way to categorize their posts for different types of followers. This issue was eventually answered (somewhat) with the advent of Collections. And my other complaint... Text formatting was limited to just *bold*, _italic_, and ~strikethrough~.

I never thought this day would come, but it looks like Google+ will finally expand the options for text formatting. New resources describe a toolbar with nine different settings that can be used to color, shape, decorate, or adjust the position of text. Here is the list of settings in the order they will be shown on the toolbar, followed by the first few button icons – the rest will be discussed in a bit.

Before getting into more details, I really just want to call out one of the best points here: Formatting is done with buttons, just like a normal text editor. There will be no more littering asterisks, tildes, and underscores around sections of text, and no need to mess with spacing or adding extra symbols when Google+ doesn't parse them correctly, it will all just work – at least I hope so.

Text color and background color come next in the toolbar. These appear to be exactly like what you would expect, though I find it surprising that Google is allowing users to change the background. It's not clear if this is just for the inline background or if it applies to the entire post, but in either case, it could become pretty unsightly while scrolling through your feed.

These are the icons you'll see in the toolbar, each reflecting the color choices you'll have. From left to right, it's the default, followed by red, blue, green, yellow, and gray. The text colors appear to be fairly intense while background colors are pale or "tinted." Tapping on the icon will open a small popup palette where you can choose from those colors. These icons were given a different shape and design.

Coming in with a similar picker style, you'll also be able to choose your alignment from a list of: Left, Center, and Right.

I'm not sure if this setting will align all of the text of a post or just single paragraphs. For the sake of titles, I'd like it to be possible to center some text, then left-align the rest. However, it's entirely plausible Google may restrict this to an all-or-nothing design.

The next item up is pretty straightforward, it's just a bulleted list. Aside from the button icon, there's not much to show on this one, but it's certainly one of the most-needed and welcome features.

The final button on the toolbar will allow you to change the font of your text. I'm not sure you should get too excited, this probably isn't an exhaustive list of fonts like you might see in a typical editor. Google only has a list of three standardized choices: Default, Serif, and Condensed.

Despite the short list and a picker layout that certainly suggests only items from that list can be selected, it is worth pointing out that the name of the button image is quantum_ic_font_download_black, which might mean there will be other fonts available for download. I mention it, but count me as a skeptic. I'm pretty sure we'll only have the three choices.

I want to throw in a personal / editorial comment. Frankly, I think anybody that says Google+ died is either avoiding awareness of an active user base or desperate to prove themselves after predicting its death many years ago. Nevertheless, there's no denying a big drop in activity as even many diehards eventually abandoned their feeds or directed most of their attention elsewhere. Problems with spam have only further discouraged both posting and commenting.

I'm both happy to see these changes and disappointed that they didn't happen years earlier. It's impossible not to ask if it's too little and too late. But let's also ask why it's happening now. Why after all this time?

Predicting the motivations of a person or company is almost always a bad idea, but if we look around, there's a fairly plausible story to be found. In light of Verizon's recent acquisition of Yahoo, which included Tumblr, a not-often-discussed competitor to Google+, it might not be an accident that Google is now enhancing the formatting capabilities of text, thus improving short-form blogging. I think most people expect Verizon to have a fairly bad influence on Tumblr, and many people will be inspired to take their efforts elsewhere.

We could probably also look to the assorted dramas surrounding Facebook (more links) or complications with Twitter. Let's just say, this isn't the worst time to have a competing social network with plenty of room to accommodate new and returning users. I'm curious to see if people will come back to Google+ or if it's just too late to start a buzz (pun intended).

$1,200 RED Hydrogen One coming to AT&T and Verizon this summer