We have blockchains for currencies, blockchains for sex, and blockchains for phones. Or is it phones for blockchains? Either way, add HTC to the list of companies interested in finding profit from the subject with its new Exodus, ostensibly a decentralized, blockchain and buzzword-packed marketing experience that may also be a phone. 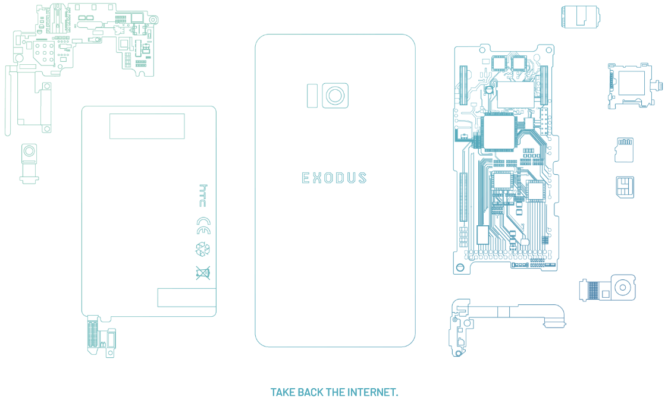 The Exodus has no specifications, though it does include some highly-marketable and probably fictitious design schematics that make it abundantly clear this is a very technical product. It also features "The Switzerland of Protocols," a "Universal" wallet, "DApps" (decentralized apps, for non-crypto normies), and all sorts of other nebulously defined features ostensibly meant to enhance security.

According to The Next Web, HTC may even accept cryptocurrency as payment for the phone, whenever it exists. The Exodus will also apparently feature a native blockchain network, with all phones able to serve as nodes for the Ethereum and Bitcoin networks.

"Through Exodus, we are excited to be supporting underlying protocols such as Bitcoin, Lightning Networks, Ethereum, Dfinity, and more," says Phil Chen, Vive founder and 'Decentralized' (sigh) Chief Officer for the new endeavor. "We would like to support the entire blockchain ecosystem, and in the next few months we’ll be announcing many more exciting partnerships together."

This is all hot on the heels of Sirin Labs' Huawei-backed blockchain phone "Finney." It doesn't exist yet either, but at least it has specs. For more information about the Exodus, you can register/reserve one with your name and email at the landing page for the phone.

HTC's site for the product also features blandly anti-tech-establishment crypto-vogue blurbs including "Take back the internet," and "THE REVOLUTION WILL BE TOKENIZED." I'd like to make it abundantly clear that I'm trying to be as dismissive and disdainful as possible when it comes to low-effort marketing efforts like this when I say, "K."