Android 8.1 Oreo has rolled out to the Moto X4 and its Android One brother, but the update has brought with it a pretty major issue: nonfunctional USB transfer. That means that Android Auto and ADB, among other things, are currently not working. Luckily, there's somewhat of a workaround, as well as a fix on the way.

Countless threads on the Google Product Forums, Motorola Community, and XDA Forums have been created to discuss the issue. Most complain about Android Auto not working, as that's something that people use multiple times every day, but the underlying reason is that USB transfer in general is borked. MTP file transfer, ADB, and basically anything other than charging have all been rendered unusable as a result.

@Moto_Support My moto x4 just upgraded to OPW28.1 and now Android Auto doesn't work. I tried rebooting and factory reset. This seems to be a common issue. Is there a fix for this in the works? If not, can I get a refund on my phone?

It's been discovered that the culprit is tied to Screen Lock. Completely disabling Screen Lock (setting it to 'None'), then rebooting the phone will restore all USB connectivity. However, re-enabling Screen Lock will immediately disable it once again. This is the workaround that Motorola is currently pushing, but encouraging customers to leave their phones completely unsecured probably isn't the best idea. 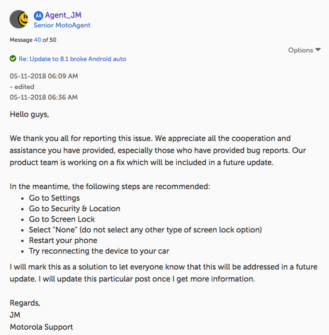 Motorola and Google are aware of the issue, and both have released statements saying that an actual fix is on the way. Unfortunately, no timeframe has been given, but hopefully something comes of this sooner than later.

As an aside, there are multiple reports that the 8.1 update has deleted pictures in all text messages prior to the Moto X4's 8.1 update, causing them to show as blank text messages. It seems like this update really should have been tested more before being released.