Google Drive doesn't break the bank when it comes to storage. For a mere $20 a year, you can add 100 GB to your combined Google service data pool and apply that space to anything from Google Photos to overly-large emails. And now Google is making things a bit more clear when it comes to the subject of storage for its various services. The new Google One replaces all non-G Suite business Google Drive storage plans with a wider variety of storage options, some at an improved value.

To be perfectly clear, Drive isn't going anywhere. All your spreadsheets and synchronized files will still be in the same Google Drive. This is just a new name for the associated storage plans for Google's various products and services (like Photos, Drive, Gmail, etc.), with Dropbox-killing pricing improvements and new storage quantities.

The pricing structure for the new Google One plans is just below:

The old 1 TB plan seems to have been removed entirely, replaced by the 2 TB plan at the same price. All customers outside G Suite business will be migrated to the new Google One plans, with users of the current 1 TB plan to be upgraded to 2 TB at no extra cost. The new plans are also shareable between family members in some form, though details aren't provided. 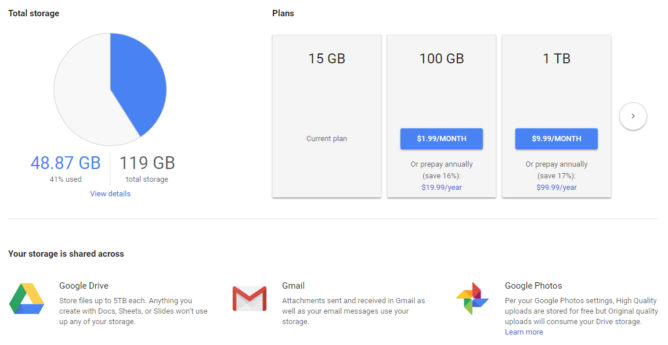 The base 100 GB rate is unchanged from current pricing, but the two new options are an improvement in value and selection giving you both more choice and a bit more data for your money.

New perks include "one-tap" access to customer support for Google products and services, as well as apparently complimentary credits on Google Play and "select" deals for things like hotels dug up via Google Search, etc. Other benefits will be added for Google One subscribers over time.

One noteworthy omission in the Google One plans is yearly pricing. So far, there's no mention of it whatsoever. We've reached out to Google to see if yearly discounted plans will continue to be offered, and we'll update this article if we receive any information about the subject.

Google One will be replacing Google Drive storage plans in the US over the coming months, with the rest of the world to follow later. For more information, you can register to be notified about availability, though more details should be forthcoming via email soon for existing storage subscribers.