Google began rolling out a more-beta-than-usual update to its search app a couple days ago. Despite following the rush of I/O announcements, it doesn't look like this version brings any new features to users. However, like almost every update, it comes with an assortment of clues about upcoming changes.

A Note on Bugs

Lest we forget that these updates come out through the beta channel, we've got a good reminder that you can sometimes expect some bigger bugs to creep in. Version 8.3.7 seems to be rocking some interesting issues, like blank text on news cards and toggles that don't actually reflect their current on/off state properly. If you're not in the mood to contend with some issues like this, I'd recommend waiting for the next minor update. 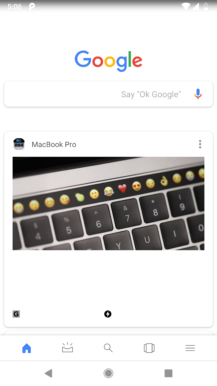 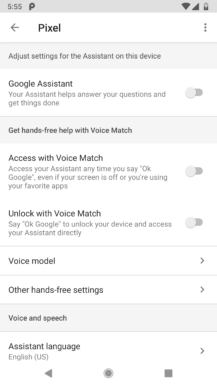 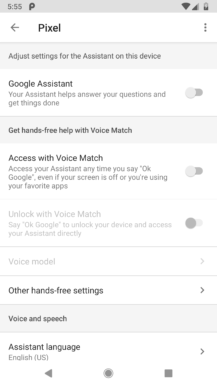 While some of these bugs are pretty trivial, the issue with toggles is a bit more serious. In most cases, you won't be able to tell if a setting is enabled or disabled. In the shots above, you can only tell Access with Voice Match is enabled in the left shot because it also enables Unlock with Voice Match. If the Access setting is turned off, Unlock will be completely grayed out and unusable. However, there are many other settings that don't have any immediately visible side effects.

Read later services and apps became a staple in the early iPhone and Android days – almost everybody had one installed, whether it was Read It Later (now Pocket), Instapaper, or what seemed like hundreds of others. Now that the dust has settled and many of the smaller services have faded away, it looks like Google may be adding similar functionality to its interface.

The clues for this come from text used in a command to clear data, which will wipe stored web pages from devices. This suggests that the Read Later feature will be oriented toward making copies of web pages for offline access, and probably puts less emphasis on bookmarking articles that you don't have time to get through in the moment, which would require a more dedicated interface.

The Read Later feature will probably co-mingle with the Recently Visited screen. At least that looks likely since one line mentions both together.

Google may be adding a new notification that appears to handle reading and replying to messages. There's not much here to examine, but there are button labels for common operations that will allow users to reply or skip incoming messages.

It's pretty clear this is an implementation of Direct Replies, but where it's getting messages from isn't as obvious. It's possible Google is planning to merge in the features of the Reply app, which began testing about three months ago. That would mean users would have even more Google-provided smarts out-of-the-box, but it would also raise privacy concerns. Alternatively, there may be a new API in the works that allows apps or other services to send messages that are surfaced through Google's UI. As of now, there's just not enough clear evidence to go on.

We've seen Google Assistant for Households mentioned before with the v7.35 update, but most of the text was pulled out in the following update – a fairly common occurrence for unreleased features. Now that text is back, along with a few more lines that make it slightly more obvious that this isn't ready to launch just yet.

I won't repeat the original text here since it's completely unchanged and only really includes the title Google Assistant for Households and the statement, "You and your household are a team. Your Google Assistant can now treat you like one, helping you work and play together".

However, the new lines are worthy of a quick note. These lines belong to the splash screen that's shown for editing the list of people living within the household. The striking detail is that there's placeholder text for the list of family members, named Member 1, Member 2, and Member 3, plus 'Edit' buttons on each line. If this text is here, it's a pretty good clue that the interface, and probably a fair amount of the code, is still incomplete.

If you're keeping up with news about the Pixel Buds, you've probably seen a lot of stuff about double-tap and triple-tap gestures for power and playback controls. At this point, they're kinda just dancing back and forth. The latest update returns one message to its original version so it reports that you can manually sleep or wake your Pixel Buds using a triple-tap on the right earbud rather than a double-tap.

New:
<string name="sleep_mode_screen_apollo_message">To put your Pixel Buds in sleep mode, place them in the charging case. Take them out to wake them.\n\nTo manually sleep or wake your Pixel Buds, triple tap the right earbud.</string>

Old:
<string name="sleep_mode_screen_apollo_message">To put the Google Pixel Buds in sleep mode, place them in the case or disconnect them from Bluetooth. To wake them, take them out of the case or double-tap the right earbud.</string>

Follow-up: Switching Notes and list services will not touch data

Just about a week ago, we saw that Google Assistant would begin to allow users to switch to different providers for notes and lists requests. The latest update adds one minor note about the transfer process, or rather, it basically explains that there is no transfer process.

Any data that you've put into one service will be left untouched during the switch. Nothing will be deleted, you will simply begin using the new service and the old one will remain as-is.

Technically, the message doesn't specify whether or not any data can or will be copied over, but it seems pretty safe to assume that's not offered either.

It's a trivial detail, since anybody would assume it's going to be here, but Alarms on smart displays will support snoozing an alarm.

Yeah, strangely, that wasn't already there before.

Also related to smart displays is a small addition to the Duo settings screen in Google Assistant. There will be a link to the Duo app's list of blocked numbers.

Weekend poll: What was your favorite announcement from Google I/O?