Google recently rebranded Android Pay to Google Pay, and it's now running a promotion to increase use of the service. From now until May 14th, you can get a $10 Google Play credit if you make five purchases via Google Pay, with just a few caveats. 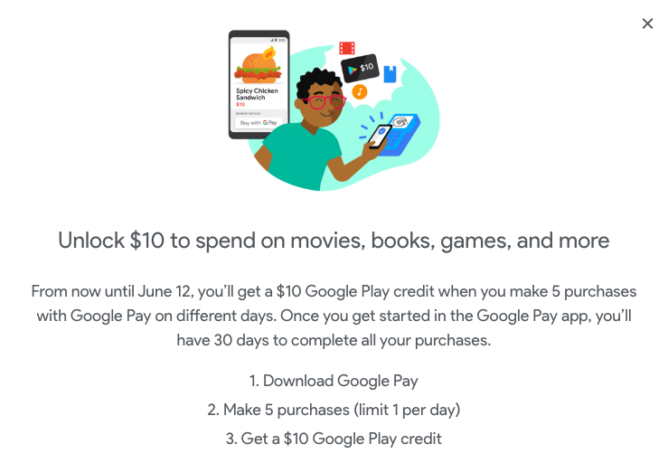 The promo is pretty straightforward - just make five purchases sometime between now and May 14th to get a free $10 credit for Google Play, which you can use to buy apps, movies, books, and more. The popup when you click on the promo actually says June 12th, but it actually expires May 14th according to the actual site and the Terms of Service. The only conditions are that a) you only make one purchase per day, b) you make all five purchases within 30 days of your first, and c) you live in the US, UK, Canada, and Australia. Of course, the reward will be £10 in the UK, $10 CDN in Canada, and $10 AUD in Australia.

There isn't a minimum purchase cost requirement, so even if you just purchase a water from the vending machine every day for five days, you'll be able to get that $10 and buy whatever your heart desires. Not a bad deal.

It turns out that this promo is only for brand-new users, so if you've used Android Pay (or Google Pay before this promo started, though it's unlikely), you're out of luck. Apologies for the oversight. Weekend poll: What was your favorite announcement from Google I/O?