It has taken a while for LG to update its 2017 ultra-flagship to the latest (major) release of Android. The Android Oreo OTA rolled out in South Korea at the end of last year, with a later update adding features from the V30 ThinQ. The Sprint V30 received Oreo in March, followed by AT&T a few days later and Verizon in April.

It took a while, but T-Mobile has finally updated its own V30 to Android 8.0. Unfortunately, it hasn't started rolling out - you can only get it from LG Bridge. You can also download the OTA package from XDA and install it using LG's 'UP' desktop software. According to the info page, the update includes the April 1 security patch level. 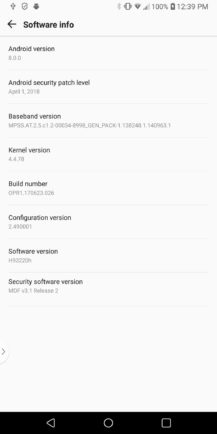 Just like the Sprint, AT&T, and Verizon updates, the AI camera from the V30 ThinQ is included. Presumably, the rest of the device has been rebranded to 'V30 ThinQ,' like the other carrier models. Hopefully T-Mobile will begin rolling it out to everyone soon.

T-Mobile has released the help page for the update, and the OTA rollout has started. If you don't have Oreo already on your T-Mobile V30, you should get it soon.

According to T-Mobile, the OTA rollout was halted on May 12 due to multiple bug reports. There is no ETA for when a fix will be made available.