Pocket Casts was just recently purchased by a group which includes NPR, and the developers have reassured us that their plans for the app haven't changed. But what if Pocket Casts had a slick new look to show for it? Google just released a partner study on its Material.io site, teasing a vivid re-imagining of the popular podcasts app. 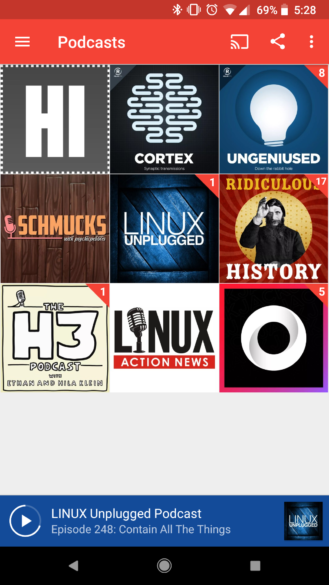 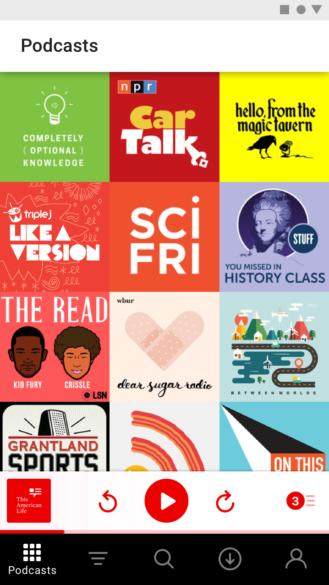 The new interface has a much better use of color. According to the text of the design study, not only is that an appreciated aesthetic choice, that color is a dynamic response to podcast artwork, giving each of your subscriptions a slightly different and unique experience. It even extends so far as to include complimenting gradients in other subtle elements of the UI, like the progress bar.

Although we can't see them—due to the nature of the leak and the limitations of static content—transitions and animations in this design study should also be pleasant. That new bottom navigation bar, a common element featured in a few other recent redesigns, would move out of sight when the player opens. Controls for playback would use "choreography" to appear as required, with ample space provided for other elements.

In a word, this leaked UI looks "fun," and fun is good. The text of the partner study is a bit ambiguous, but it sounds like Pocket Casts might actually be considering this new interface. We've reached out to Shifty Jelly to see if there's any chance this design study will result in changes to the app, and if it will, we'll be sure to update this article.

Pocket Casts' Chris Martin has confirmed, this is a preview of what we can expect in a coming update:

We're working on updates to both Android and iOS. That link has a sneaky preview of the Android update :)

Glad to see it isn't just a concept.

We were able to get a statement from Shifty Jelly itself about the new design. We asked if this was going to be a new design, and if so, how soon it might be coming. The company wasn't able to provide us with an answer to either of those questions, but it did give the following statement:

I can confirm though that it came for a 1 week design sprint we did with Google. The idea wasn't to come up with a final design, it was to explore new ways we could adapt Pocket Casts using Material Theming.

Based on that information, this may just be a concept, and not so much a "preview" of an update.