After seeing Assistant make a phone call and fake-talk like a human at I/O a few days ago, nothing surprises me anymore. But I'm not going to deny having a little smile on my face when I saw that Google Lens was capable of recognizing receipts and bringing them back up later when you ask it to show your receipts. We just discovered this feature thanks to our tipster, but Google being Google, it's likely this has been live for a while and we didn't run into a situation that triggered it or it's been rolling out slowly to people.

It's not the first time we see Google recognizing receipts, Photos already does this and archives them, but seeing it happen live in Lens is still an impressive feat. Assistant also kicks in with one special action: it tells you that you can specifically call back all your receipts by saying "show my receipts." This is also not the first time we've seen Lens remember something on demand. It already has a special action to remember things for you and bring them up, but it usually mashes everything together. Receipts are now separated from the bunch. 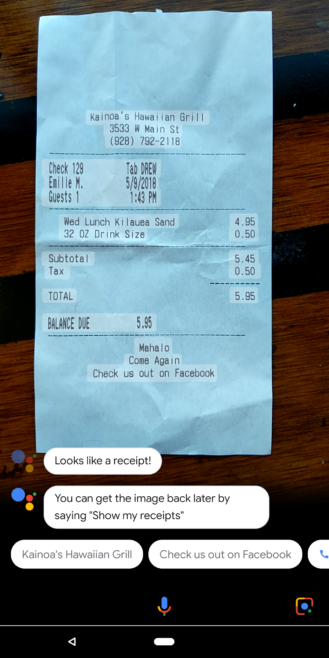 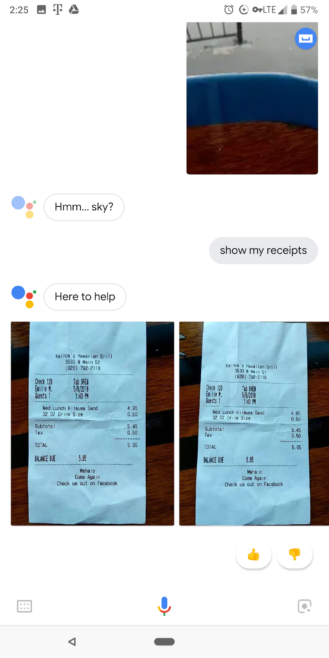 I tested this with other types of special items that Photos usually recognizes, like documents, shipping labels, and IDs, but none have this special ability to later be recalled by "show my document_type."

It's also worth pointing out that when you're still in Lens, you can select any text from the receipt and copy it (an ability that was recently added), but when you call it back up in Assistant, you can't. It's a still image. You can't do anything with the image either, like share it or save it. So while this may be handy when you want to gather a couple of receipts for your personal use or finance, it may not completely replace taking a proper photo if your company's expense filing requires proof. At least not in its current implementation.