During the Google I/O keynote, Google talked about the WaveNet voice engine and how it was making speech synthesis more realistic. To drive the point home, Google announced six new Assistant voices were coming to devices. We expected them to roll out at a later date, but they're already live in the Assistant settings.

The voices appear to be out on all devices. We've checked Pixels on Android P, a Galaxy S9, and more. You just have to know where to find the voices, which are in a somewhat buried menu. Open your Assistant settings, then go to Preferences > Assistant Voice. There were two voices available previously, so the list now has eight entries. The top two are the original voices you know and tolerate. 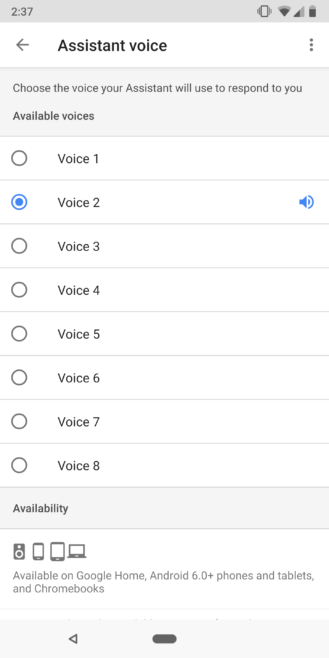 The WaveNet tool comes from Google subsidiary DeepMind. It uses a neural network to create speech that's more natural than Google's old system. It's been in use since last year on Assistant, and the difference was noticeable when it rolled out. There's still a slightly robotic quality to the voices, and that's true of the new ones. Still, not bad for a computer.

Confirmed: Google Pay works on Android P DP2, but only if you don't unlock the bootloader