Android TV is a platform with a lot of potential, but also one that needs a little TLC in order to bring users the best possible experience. We've already told you about some of the ways Google's looking to put things back on the right track, like working with the manufacturers of Android TV hardware to ease software development and see that devices get the latest features as soon as possible. Now we're learning a little more about how some of that upcoming functionality promises to make setting up a new Android TV system a much more pleasant experience.

Once Android P hits Android TV, you'll be able to quickly set up new hardware with the help of your phone. The Google app on your Android handset will see the Android TV device and give you the option to quickly transfer Wi-Fi and account settings right over to the unit. We can also look forward to a streamlined sign-in flow for users on iOS hardware or those connecting through PC browsers.

Android TV thrives on apps, and Google's also working to make it easier to configure a new system with the apps you're going to want most. Users will be prompted with a list of app suggestions during initial setup to get them started on the right foot, pulling that list either from other Android TV devices they already use, or based on matching apps installed on their Android phones. 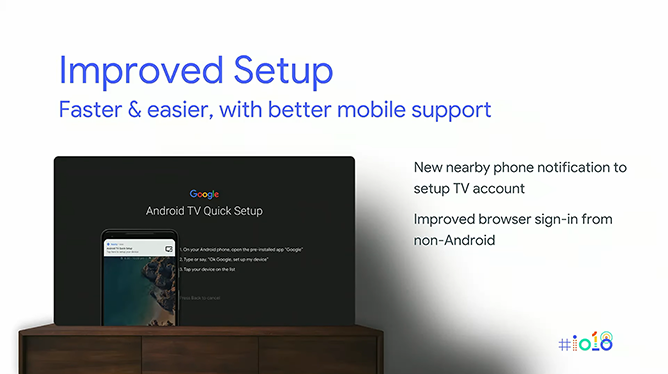 If you were a little too enthusiastic about getting up and running and may have skipped some configuration details along the way, Android TV with Android P will do its part to help you fill in the blanks, improving the settings menu by automatically suggesting that you revisit areas you may have previously neglected.

Speaking of “filling in the blanks,” maybe our favorite new setup feature is support for Autofill with Google. Entering in account details for various services with an Android TV remote isn't exactly an experience most of us look forward to, but if you've got that info already affiliated with another Android device, Android TV will be able to pull those credentials up and enter them on your behalf.

All told, Google expects Android TV setup time to be reduced by roughly one-third thanks to these changes arriving with Android P. For more details on these setup improvements, as well as all the other Android TV news Google had to share, check out its full I/O 2018 Android TV talk:

Gmail Smart Compose is going live as an 'experimental feature'