Having information is one thing, but coming up with a really intuitive way to deliver that info is another challenge entirely. Google Maps already knows its way around our world better than many of its inhabitants, and while it can easily churn out a set of directions from here to there, plotting a route on an overhead map can feel six kinds of old-fashioned. Today at I/O Google gave us one heck of a compelling look at the future of phone-based pedestrian navigation, showing off the augmented reality-powered Visual Positioning System.

You can think of VPS as the intersection between Street View, augmented reality, and the existing navigation system of Maps. The system expands beyond standard GPS and compass sensor data to also tap into your phone's camera to visually identify the world around you. Just point your camera down the street and VPS uses AR overlays to show you which way to go. It can also incorporate information on business and attractions along your route, and Google's even experimenting with the idea of animated AR guides users can just follow to their destination. 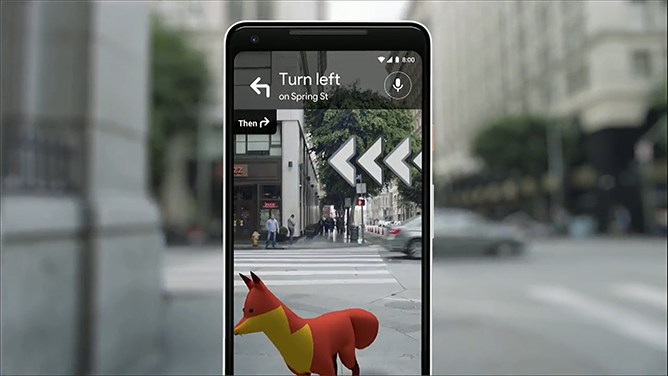 It's always a good idea to follow a fox and see where it leads you.

If this all sounds a bit familiar, we can't blame you, as Google talked about a very similar-sounding VPS at I/O last year. While that was also an AR-based navigation system, the details were much more restrictive: Google engineered it for phones with Tango hardware only, it was designed for indoor navigation, and though it still sounded pretty neat even with those caveats, we never really saw it get off the ground.

This VPS “2.0,” if you will, looks hugely more useful — intended to be available on standard Android handsets and no longer restricted to Tango-friendly indoor locations. But while that's the gist we got from Google's presentation today, unlike some of the other Maps announcements, this one does not appear to be hitting our phones anytime soon. Considering the “in the coming months” time frame we saw for those other Maps features, we get the distinct impression that VPS is much further out, and could continue to evolve quite a bit before it sees the light of day.