When it landed a couple months back, Android P delivered significant changes to the volume button dialog, relocating it to be closer to the keys themselves while setting media volume as the new default. Unfortunately, that latter change meant it's a bit harder to actually change ringer modes without tapping the screen.

In the latest developer preview for Android P, Google has added a new configurable hardware key combo that lets you press volume up and power simultaneously to set the ringer mode to silent or vibrate, giving us a complex and counter-intuitive solution to a problem that didn't need to exist. 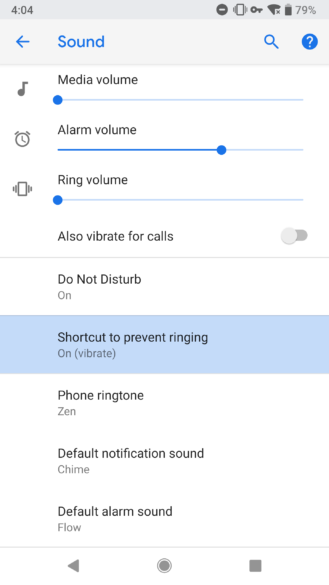 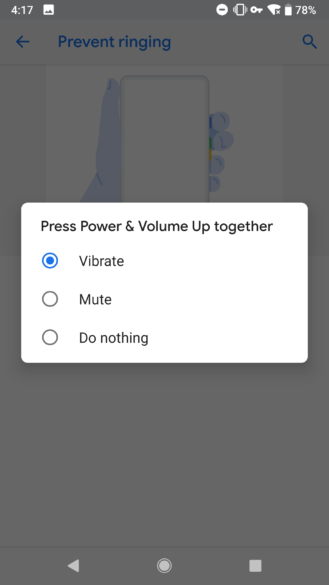 The new option was first spotted by Dieter Bohn of The Verge and rests in Settings -> Sound -> Shortcut to prevent ringing. It has three configurable options that allow for the key combination to set the ringer to vibrate, mute, or have the keys do nothing.

It works as you'd expect. Just press the power and volume up key together, and your ringer will be switched over into the configured mode, with a toast notification popping up to let you know about it. You don't have to be too precise with the timing for each button either, so it isn't that difficult to trigger.

"Yo, I heard you like taking accidental screen shots on the iPhone X... Don't worry, we got you covered."

Honestly, though, having a complicated hardware-key shortcut that will easily be confused with the screenshot shortcut on most phones (volume down + power) seems like a bad idea to me. Especially since this is a problem that didn't even exist on older versions of Android, where you could simply press the volume down key until you were in the mode you needed. That's not even mentioning the confusion that will stem from having the volume up key counter-intuitively associated with two silent modes.