Google is gearing up for a lot of announcements tomorrow at I/O, but it looks like the company is ready to start sharing ahead of time a little bit of car-related news. It is announcing enhancements to the Android Automotive platform, though that's still a couple of years away from reality, and new capabilities for Android Auto.

You may recall Android Automotive as the full-on Android platform developed for cars that was demo'ed at I/O in 2016. Unlike Auto, it doesn't run or rely on your phone. Instead, the car's entire infotainment system runs on Android. Developments have been happening on the platform, the latest of which were several announcements at CES 2018, though nothing tangible has come of it yet.

Now Google and Volvo are announcing that they're teaming up on the platform and working on integrating the Play Store, Google Maps, and Google Assistant into Volvo's next-gen Sensus infotainment system. The apps available from the Play Store will obviously be optimized for cars, Google Maps will have live traffic and fresh data to guide your way, and the Assistant will also let you control in-car features such as the A/C. But don't get your hopes up too soon, Volvo says, "The first Android-based system will launch in a couple of years from now." 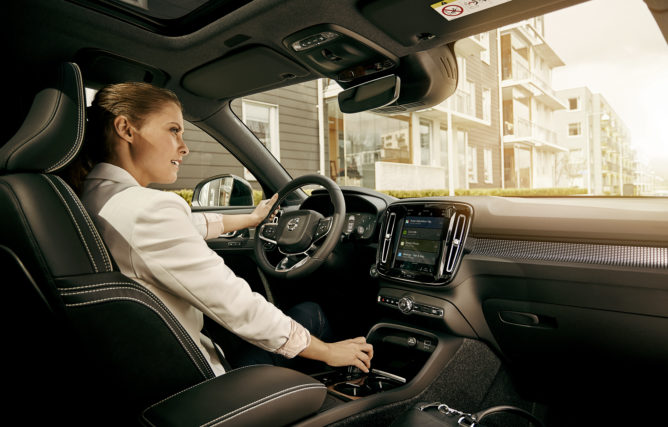 In more tangible and easily accessible news, Google is also announcing enhancements to the currently-available Android Auto. Google seems to be relaxing its tight grip on the UI just a little bit, so music app developers will have more layouts and templates with emphasis on images to implement. Searching for music will also get better as you'll be able to find a tune in any app from the main Auto search and check more than just one result. Plus group messaging and RCS support is coming to Auto.

Google says there's more to come, so if you're a developer interested in creating car-friendly apps and experiences, you should catch the Android Automotive session at I/O. Also on display at the event will be one demo preview of Volvo's future infotainment system and several showcases of Auto's new capabilities with partners such as Pandora, Pocket Casts, Spotify, Telegram, WhatsApp, Android Messages, Play Books, and Play Music. If only this would mean I can easily send and listen to WhatsApp voice messages in Auto, it'd be the happiest news.

Volvo Cars, the premium car maker, today announced it is working with Google to embed the voice-controlled Google Assistant, Google Play Store, Google Maps and other Google services into its next-generation Sensus infotainment system, based on Google’s Android operating system.

Volvo Cars’ partnership with Google will further enhance the way Volvo customers engage with and interact with their cars. Apps and services developed by Google and Volvo Cars are embedded in the car, plus thousands of additional apps are available through the Google Play Store that is optimised and adapted for Android-based car infotainment systems.

Since the next generation of Sensus will run on Android, new apps and software updates will be available in real-time and can be automatically applied. This allows future Volvo cars to react to customer needs and offer drivers up-to-date information and predictive services.

The Google Assistant provides a central voice interface for the car that allows drivers to control in-car functions such as air conditioning, and use apps to play music and send messages. This integration contributes to reducing driver distraction, helping drivers keep their eyes on the road at all times.

Today’s announcement builds on the strategic relationship between Volvo Cars and Google, when Volvo Cars last year announced the new generation of its infotainment system will be based on Google’s Android platform. The first Android-based system will launch in a couple of years from now.

Volvo Cars is committed to developing strategic relationships with third parties to broaden the range of connected services offered to Volvo customers, embracing the disruption currently underway in the car industry.

The company also continues to develop its own apps, software and connected services within the Volvo Car Group, using its growing force of software engineers.