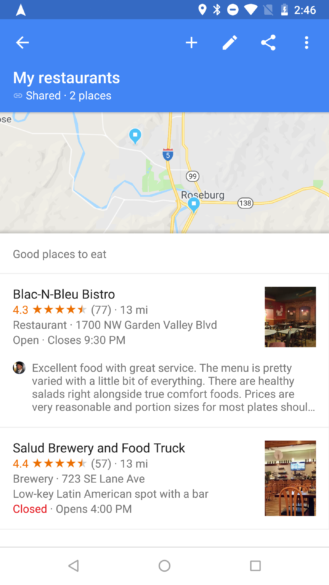 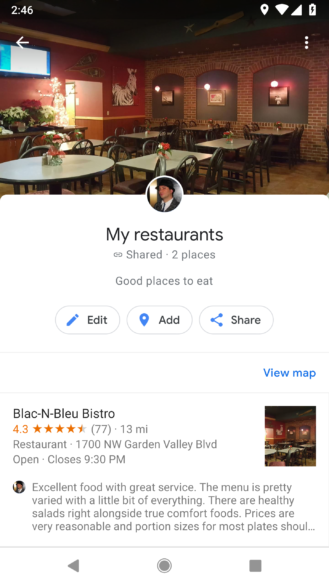 Your saved lists just got a lot prettier. Tap into any list with saved locations and you'll now see a completely revamped layout topped with a photo from the location followed by a title area with details about the list and buttons to Add, Edit, or Share the list. Below this is the actual list, which remains mostly unchanged. And if you miss the map view, there's still a link to open a full screen map with all of the locations highlighted.

Keeping friends and family apprised of your whereabouts is as easy as starting up location sharing and sending an invite to them. Of course, if you're already driving, the last thing you should be doing is picking through a list of contacts to find somebody specific. Evidently, Google Maps is about to allow the process to happen in reverse, enabling users to ask other people for their location. 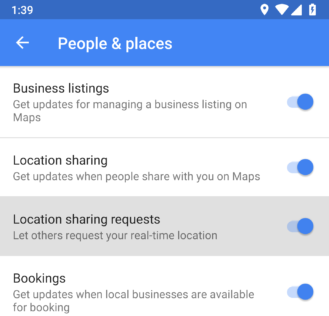 If you look in the People & places section of the Notification settings, there's a new toggle for turning off location sharing requests. It sits just below its counterpart, which is for notifications when somebody offers to share a location with you.

The odd part about this is that the interface for requesting a location doesn't appear to have gone live yet. It may not be done, or more likely, it's probably just waiting for somebody to flip a switch at Google's end.

'Your places' just got whiter 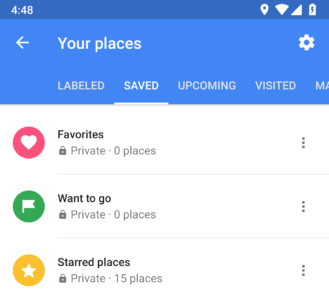 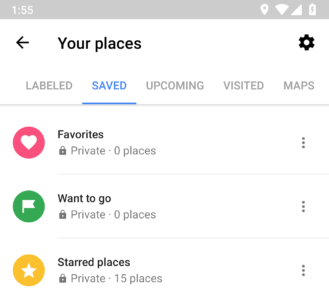 The latest design direction from Google has been to drain the color from its apps, or at least from certain conventional parts of the UI. The latest target seems to be the Your places screen in Maps. The screenshots show the change. I'm not a fan, but we'll see where this goes soon enough.

(Oh, and let's try to not dwell on the title of this section. It turns out this new design direction was bound to force us to write something like that eventually.)

Disclaimer: Teardowns are based on evid ence found inside of apks (Android's application package) and are necessarily speculative and usually based on incomplete information. It's possible that the guesses made here are totally and completely wrong. Even when predictions are correct, there is always a chance that plans could change or may be canceled entirely. Much like rumors, nothing is certain until it's officially announced and released.

There are actually a few really small tweaks to the UI, and most don't really warrant specific coverage. However, this one caught my attention due to the extra lines that came with it. As the screenshots below show, the overflow menu for the sorting options on reviews has seen some renaming. Little tweaks were made, like swapping the word score for rating, helpful for relevant, and dropping most recent to say newest. 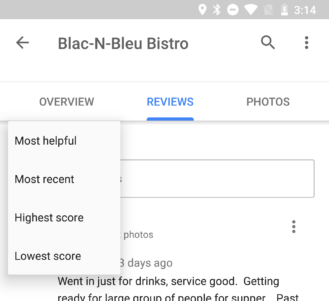 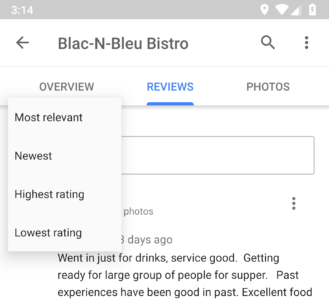 Where things start to get interesting is that there is an option not showing up in that list: lowest rating. In addition, there's also a line indicating that we'll be able to sort photos, as well. Judging by the naming, it also looks like these things may not just be intended for reviews and photos left by other people, but probably our own, as well.

All told, this probably isn't going to be a big deal for most people, but Local Guides may find sorting options to be useful if they want to see how their contributions are being received.

I doubt there's any real significance to this, but it looks like Google might be planning to adjust the name of location sharing to "Journey Sharing." Alternatively, this might be the title of a new feature for tracking your travels and sharing an overview with others, but there's no other meaningful evidence to support that yet. Either way, it's worth mentioning that there's a new name.