Magisk developer topjohnwu might be off serving compulsory military service, but he's still maintained a rapid release schedule for his popular root solution. Magisk v16.4 (and Magisk Manager v5.7.0) were released over the weekend, and they add a handful of technical fixes, app shortcuts, and Android P improvements, but it isn't all smooth sailing. The latest version also removes Magisk's 64-bit binaries, which may break root support for some apps, including the very popular Tasker.

The full changelog for Magisk v16.4 and the corresponding Magisk Manager update (v5.7.0), are just below:

Magisk
v16.4
- [Daemon] Directly check logcat command instead of detecting logd, should fix logging and MagiskHide on several Samsung devices
- [Daemon] Fix startup Magisk Manager APK installation on Android P
- [MagiskPolicy] Switch from AOSP u:r:su:s0 to u:r:magisk:s0 to prevent conflicts
- [MagiskPolicy] Remove unnecessary sepolicy rules to reduce security penalty
- [Daemon] Massive re-design /sbin tmpfs overlay and daemon start up
- [MagiskInit] Remove magiskinit_daemon, the actual magisk daemon (magiskd) shall handle everything itself
- [Daemon] Remove post-fs stage as it is very limited and also will not work on A/B devices; replaced with simple mount in post-fs-data, which will run ASAP even before the daemon is started
- [General] Remove all 64-bit binaries as there is no point in using them; all binaries are now 32-bit only.
Some weirdly implemented root apps might break (e.g. Tasker, already reported to the developer), but it is not my fault
- [resetprop] Add Protobuf encode/decode to support manipulating persist properties on Android P
- [MagiskHide] Include app sub-services as hiding targets. This might significantly increase the amount of apps that could be properly hidden

Most of these changes aren't generally user-facing, but there are some noteworthy additions. MagiskHide should work better on some Samsung devices now, Android P shouldn't pose a problem for startup Magisk Manager installation anymore, and the new app shortcuts will come in handy for anyone running Android 7.1 or newer. 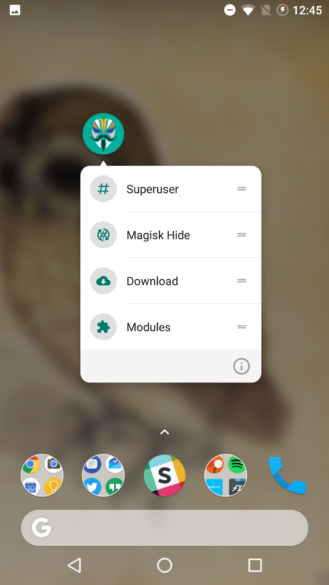 The removal of 64-bit binaries in Magisk shouldn't pose a problem for most root-using applications, but some may be affected. The changelog explicitly notes that Tasker gets hit by this, so if you use root functionality in the automation app, you may want to hold off from updating to this release until Tasker's new developer can fix it.

It may be a while, though. Tasker's João Dias noted just after the purchase that it might take him some time to familiarize himself with the codebase. If he's still figuring his way around it, an update to fix the binary change could be further out.

As always, this update can be pulled down via the Magisk Manager app, if you're already set up, or you can download the latest zip file via the instructions in the main Magisk thread and flash via custom recovery.