Google just launched its rumored Tasks revamp alongside a new Gmail experience this morning. The new interface will show up inside Gmail, if you activate the latter's redesign, and also comes with a new Android (APK Mirror) and iOS app. In this post, we'll take a look at what Tasks can - and can't - do and see how well polished its experience is.

After installing the Tasks app on your phone, you launch straight into one onboarding screen followed by your My Tasks list. The interface is remarkably slick. Yes, it's indeed very white, but the bottom menu, the large floating Add a new task blue button, and the easily accessible overflow menu on the bottom right do feel well suited to a mobile app use. 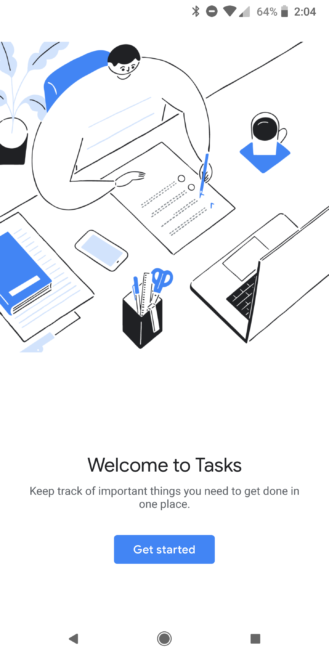 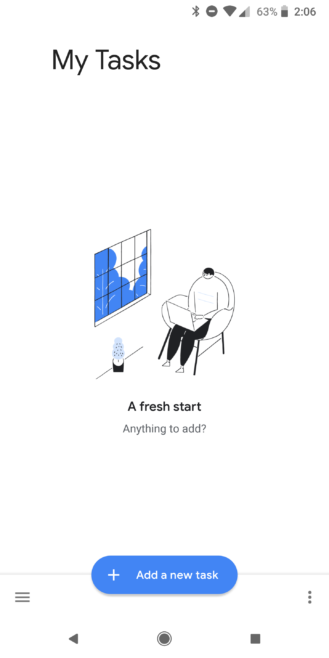 The bottom hamburger menu expands into a little overlay that lets you change your account, switch between your task lists, and create a new one. Since this is an update to the existing Tasks experience, you may find legacy tasks in your list(s). I was surprised to see three empty tasks in my "Rita" list along with 2 completed tasks, one of which may be at least 5 years old. 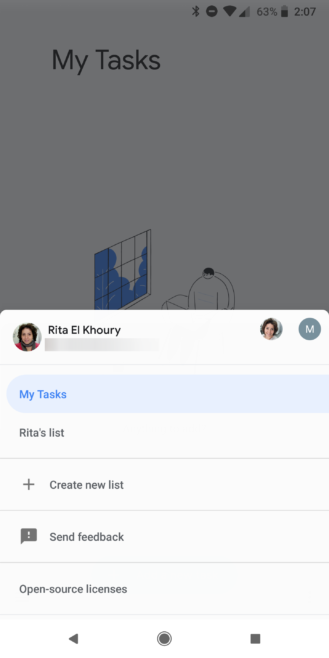 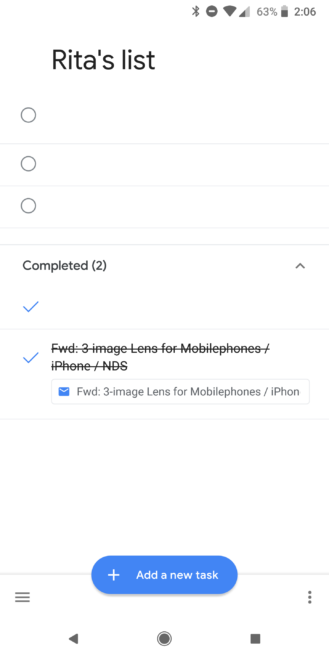 You can have as many lists as you want and creating them is easily done through the bottom menu. All your tasks will appear in the order they were created (new first) but can be manually reordered or sorted by date if that makes more sense to you. 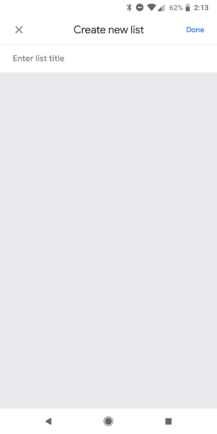 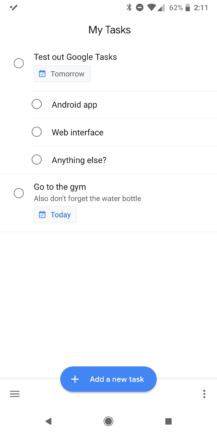 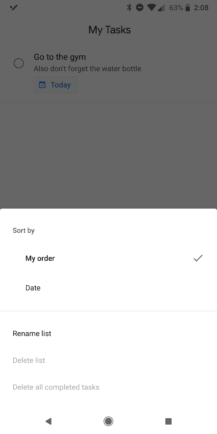 Adding a task is as simple as tapping the Add a new task blue button and typing some text. A little blue + button on the bottom left can be tapped to enable task details and date. 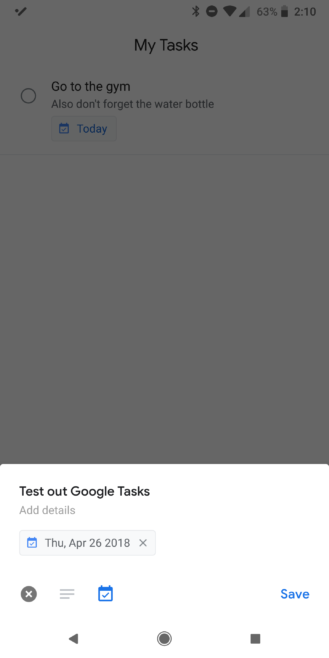 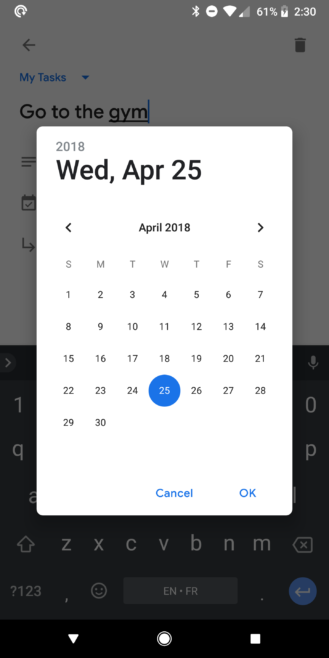 If you need to see more, the task is expandable to a full screen where you can edit it but also add subtasks (the enter key in your keyboard will put a line break inside the subtask, I expected it to add a new task instead), delete, or move a task to another list. 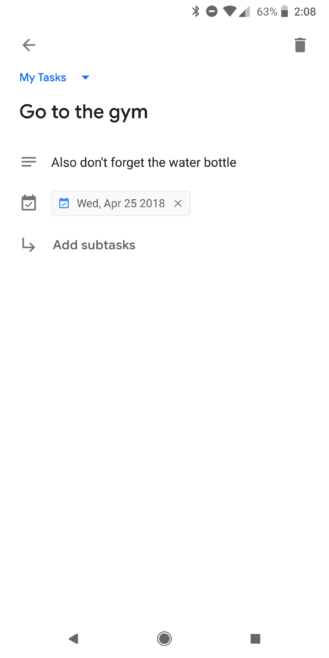 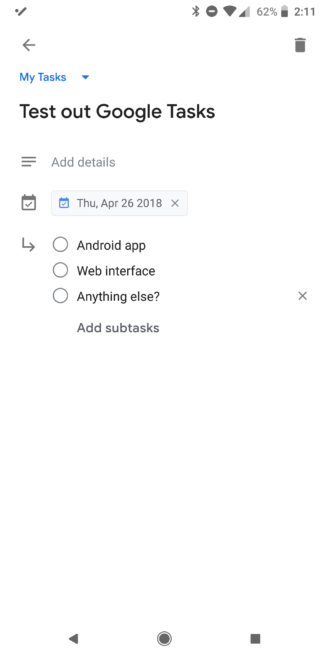 Tasks can be reordered manually if you want, and there's a neat animation that collapses large ones with subtasks so you can easily drag them up or down. You can tap the checkmark next to each task to mark it as complete, or swipe it away from the left to the right (the opposite gesture doesn't work). Unfortunately, there's no going back once you mark something as completed. You get a brief moment for tasks where an Undo toast message pops up, but then it's gone. Subtasks don't even get an undo courtesy when completed. So mark as done with caution.

You can add emails as tasks in the web Gmail interface (even if you're still on the old UI). These will immediately be assigned the subject and show up inside your task list with a neat email icon and box below them. However, unfortunately, tapping on the icon in the Tasks app gives me a "Cannot view email: no suitable app installed" error message right now. A Gmail app update might be needed for this to work properly. 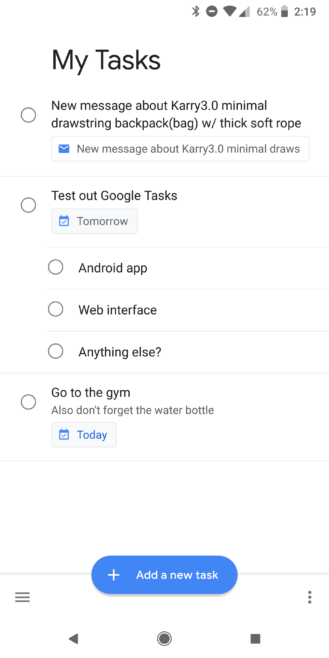 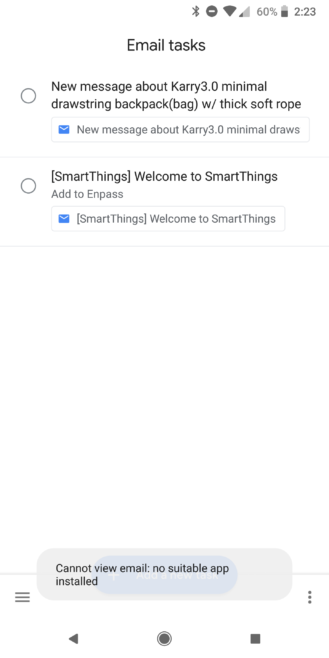 Aside from the slick interface, this first effort from Google is adequate and that's the best compliment I can give it. It has multiple list support, subtasks, details, dates, and... that's about it. There is a lot missing and I don't think I'm alone in saying I expected a little bit more than this bare minimum effort when I heard that Google was spinning Tasks into its own entity.

All the missing things

Tasks may not be aiming to replace solutions like Todoist for the hardcore GTD user, but that doesn't forgive its very rudimentary state. I won't list everything it doesn't have, but I will point out a few glaring omissions that I would have expected to see, even in a first release.

The first thing I was wondering, when the Tasks revamp was rumored, is whether or not Google would use this opportunity to unite its messy Reminders experience under one roof and make it easier to manage everything you need to get done, whether it came from Calendar, Keep, Gmail, or Assistant. But alas, the new Tasks does nothing to alleviate that problem and instead provides - as has become customary with some Google services - yet another way to do things that's disjointed from the many already existing ways. 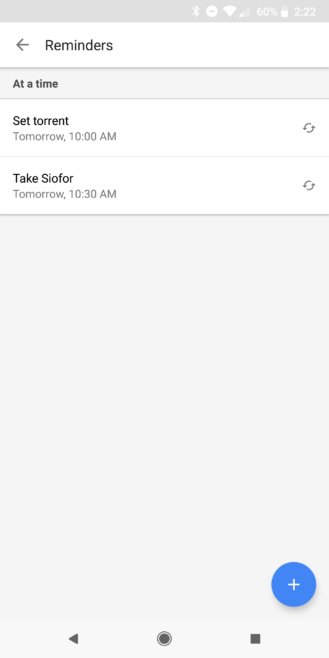 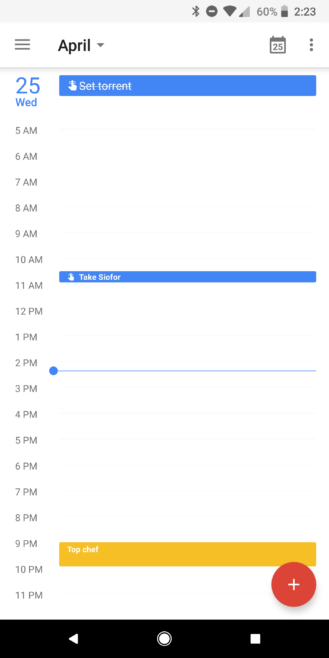 For now, Tasks could be a very simple way for users to note what they need to do, especially if many of their tasks originate from emails they receive. However, if you need more than the most basic of task management features, Tasks is not up to par. And if you were already using Keep or Calendar to manage your to-dos, Tasks isn't likely to replace them anytime soon.