You might have heard the news that Google finally launched the new Gmail today. It's appearing in browsers all over the world as we speak, but another Gmail implementation is getting some new goodies, too. The Gmail app on Android will get snooze functionality as part of this revamp, and it appears the feature is rolling out to phones.

Snooze for Gmail works just like it does with Inbox. Simply tap snooze (in the overflow menu) when viewing an email, and you can pick a time for the email to ping your inbox again. It's a way to remind yourself to deal with the email in question. Gmail has the same UI as Inbox with suggested snooze durations as well as the option to set a custom snooze. 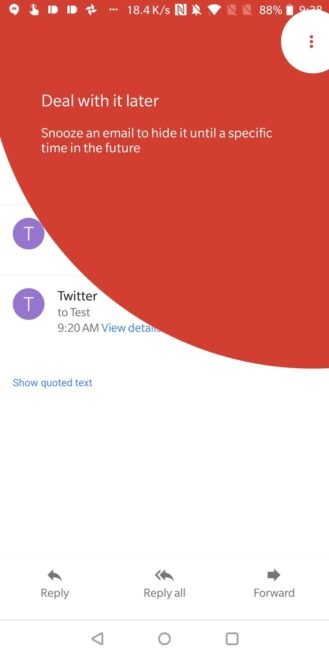 As far as we can tell, there is no rhyme or reason to who gets the snooze feature right now. It does not appear to be related to using the updated web interface nor the new Tasks app. There's a new version of the Gmail app (v8.4 on APK Mirror) floating around, but we've seen snooze pop up on the old version as well as the new one. Snooze release appears to be one of Google's staged server-side rollouts—you'll get the feature whenever you get it. Classic Google.