Have you noticed something missing from your notification shade lately? According to an increasingly lengthy support thread on Google's product forums, those handy departure time notifications have mysteriously vanished. Some users have found a Chrome-based workaround, but the root cause remains unknown.

Usually, the Google app on your phone can fire off a notification when it's time to leave for an appointment. The timing of the notification and recommended time come from your calendar, so you need to have a location in the event. Then, Google uses live traffic data to determine when you need to be out the door. 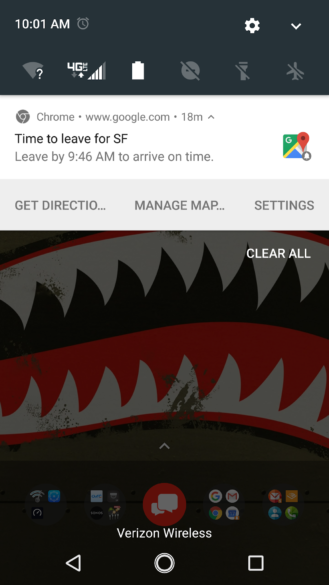 The support thread began in November of last year, and it's been growing for months as more users show up to say they too have the problem. No one has been able to offer a solution, and troubleshooting is complicated by Google's constantly changing Google app tests. The best option for those with missing notifications seems to be a Chrome-based workaround. If you load the desktop calendar UI on your phone, you can enable "time to leave" notifications. They come from Chrome rather than the Google app, but it works (see above).

It's hard to say how widespread this problem is, but I am currently unable to get the notification to appear on my phone when creating events. Chrome does fire off the time to leave notifications, though. We've reached out to Google to see if anyone is looking into this issue. We'll report back if there's news.