The Google app just leapt up to version 8.0 late last night, but despite the shiny new version number, most things are looking about the same. A new screen has been added for "Your People," while a teardown tells us that it will be possible to set regular schedules to run custom routines (when they launch), the Google Lens will be able to switch to the front-facing selfie camera, and more. 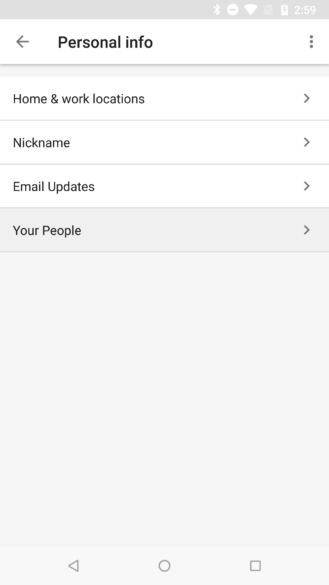 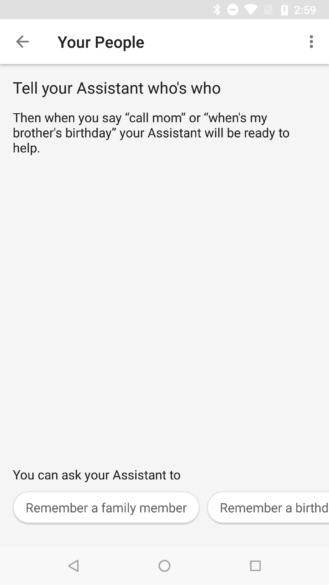 Google has supported voice commands with familiar nicknames for the last four years, making it possible to refer to somebody as mom or brother in place of their full name. It shouldn't be surprising that Google Assistant made use of that functionality early on. Seemingly, there is now a new screen related to that called Your People. It can be found in the Google Assistant settings under the Personal Information section.

The purpose of the screen appears to be purely instructional, as there's no sign that it actually displays any more than an explanation that you can "tell your Assistant who's who" and suggesting commands to have it remember a family member or a birthday.

If you tap one of the suggestions at the bottom, it will open Assistant and immediately send the selected command with no other information about who to remember or what somebody's birthday is. In fact, if you try to issue one of those instructions with useful information, like telling it to remember your mom's name or birthday, all it currently accomplishes is storing that information in Assistant's list of things it has been asked to remember, which doesn't actually make any connections between nicknames or contacts.

I'm suspicious that this screen may be visible before it was supposed to be, or maybe I'm just not recognizing its purpose, but right now it's basically just like the Nicknames screen, but with incorrect voice command suggestions.

While we continue to wait for the ability to create our own custom routines, we're getting some visibility about another type of trigger that will be used to launch them. Specifically, we'll be able to schedule routines to launch on a regular schedule.

There are three criteria we'll be expected to select: Days, time, and the speaker. The first two are pretty obvious, we'll just pick which days of the week it should run and what time it should happen. This will work pretty well for automating some things before going to work or maybe when we should normally be on our way home.

We'll also have to select a specific speaker for these routines, which is where any audible output from the routine will come through. Optionally, we will also be able to opt into getting a notification on a phone when the routine starts.

'Send to Device' from Actions on Google 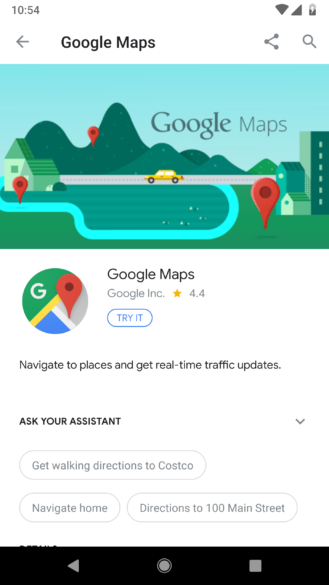 If you're browsing through the list of Actions on Google–more colloquially understood as apps for Assistant–you'll find a little "Try it" button that can instantly launch a command to the Assistant. This button is about to gain a buddy called "Send To Device," and as you might expect, it will transmit that same command to another Assistant-enabled speaker nearby.

You can probably guess this one from the title – Google Lens will be able to switch to the front-facing camera. Surprisingly, it doesn't seem to be live with the update, but there's a line of text with a name and description that leaves no doubt that you'll be able to use Lens through the selfie camera if you want.

This will make Lens act as either a clever tool to get details about the necklace you're wearing without taking it off, or it's the most vain version of Googling yourself ever. No judgements, you do you.

If you've previously opted into donating images to Google Lens, you might be wondering what you've been handing over to Google. There is now a line that suggests a button might be showing up with "data donation information."

I'm inclined to guess that it will show your previous donations, but it's plausible this is only sharing the privacy policy or something else of that general nature.

Just a few days ago, a minor update to the Google app introduced what appears to be a native implementation of Saved Pages, but it's going under the name of Collections. As part of this feature, some content will be identified by its category, and the list of types is already decently long. With this update, three additional types have been added: search results (from the Google knowledge graph), products, and itineraries.

Back in February, a teardown of v7.21 brought with it the names of four new notification channels. The first, called "Cast," had a perfectly obvious purpose, and the rest weren't exactly hard to guess from their names alone. However, those channels didn't have specific descriptions at the time. As of this update, that's no longer the case. The upcoming channels with their full descriptions are:

In a teardown of v7.19, something called "summer time mode" was added, but there wasn't really enough information to make a proper guess about its functionality. Now, there is still no more useful information, but an amusing "clarification" was added:

For those that don't read XML, the line above is literally an empty string. I'm sure there are plenty of jokes about Google's communication habits, but I'll leave those for commenters.

In truth, this is probably going to contain a message to explain what types of devices can use summer time mode or what it does, but for now, it's also an ironic statement about what we already know about this feature.

These two lines were also added, but they aren't really helping to learn much more.